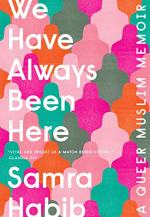 We Have Always Been Here Summary & Study Guide

Samra Habib
This Study Guide consists of approximately 43 pages of chapter summaries, quotes, character analysis, themes, and more - everything you need to sharpen your knowledge of We Have Always Been Here.

We Have Always Been Here Summary & Study Guide Description

We Have Always Been Here Summary & Study Guide includes comprehensive information and analysis to help you understand the book. This study guide contains the following sections:

This detailed literature summary also contains Topics for Discussion on We Have Always Been Here by Samra Habib.

The following version of the book was used to create this study guide: Habib, Samra. We Have Always Been Here: A Queer Muslim Memoir. Viking, 2019.

Growing up in Lahore, Pakistan, Samra Habib is taught to hide her Ahmadi identity as members of this sect are often the victims of violent hate crimes. Samra's childhood environment offers her a limited model of femininity highly influenced by patriarchy and sexism. At four years old, Samra is sexually molested by an adult man. Her mother is ill-equipped to handle the situation in the way Samra needs, and after the trauma Samra endeavors to show her parents that she is okay, making every effort to appear put together even when she was falling apart inside. As acts of violence against Ahmadis escalate, Samra's father decides to move the family to Canada in 1990.

In Canada, Samra suffers from racism and bullying at school. She feels a sense of responsibility for her family, acting as her parents' language interpreter, helping them her mother with her English as a Second Language (ESL) homework, and trying to earn extra money for the newly impoverished family. At age 13, Samra learns that she has been betrothed without her knowledge or consent to her first cousin Nasir, who immigrated with them. Samra doesn't want to marry Nasir but also does not want to cause a rift in the family. She and Nasir are married according to Islamic law when she is only sixteen. However, they decide to wait to live together as husband and wife until Samra is 18 years old. Meanwhile, Samra is making new friends and enjoying high school. She is a good student and starts to explore feminism, keeping her marriage a secret from her friends. She starts a relationship with a classmate named Peter, with whom she goes to the prom. Never happy in her marriage to the controlling Nasir, Samra finally decides she has to find a way to leave it when Nasir says that he sees domestic violence as "necessary on some occasions” (94). After an aborted suicide attempt, Samra finally gets the courage to end her marriage and never sees Nasir again. With a big rift now between her and her parents, she moves in with Peter and starts University in downtown Toronto.

Through her friends, first at school and then at work, Samra is introduced to the queer community. She begins to explore her identity and her interests in art, fashion, and creativity. By now, she and Peter have gotten married in a civil ceremony, but their relationship always seems lukewarm. More and more, Samra begins to identify as queer and wants to explore relationships with women eventually. Realizing that her marriage to Peter is an obstacle to both their happiness, she ends the relationship. Now single, Samra travels to Japan where she articulates her queer identity out loud for the first time and steps into herself more fully.

Upon returning home, Samra starts a relationship with a polyamorous and bisexual man named Alex. Through Alex, she learns more about herself and the queer community. They travel a lot together and she has her first sexual experience with a woman. By the end of their relationship, Samra is fully comfortable in her queer identity. She travels a lot, now as a single woman, and explores various sexual and romantic relationships. She also becomes a mentor figure for a young nonbinary Muslim person named Shireen who embodies the truth that "there [is] no one way to be Muslim" (160). Around this time, Samra reconnects with her faith through an LGBTQ+ friendly Mosque. Inspired by her experiences there, she starts a photography project in which she takes portraits of queer Muslims. This project not only increases their representation, but it also challenges stereotypical, reductive, and limited ideas of what it means to be queer and what it means to be Muslim.

Over the years, Samra gradually reconnects with her family and rebuilds her relationships with her parents. After many years, she finally comes out to them and they are surprising supportive and loving. By 2016, Samra's photogrpahy project has gained international attention, she has published a number of articles, and is often invited to speaking engagements on topics of race, Islamophobia, the concept of community, and spirituality. A notable speech she delivers in North Carolina the morning after the election of President Donald Trump highlights the need for her kind of activism in the contemporary political and social climate. Samra embraces her intersectional identity and challenges normative stereotypes on multiple fronts. Now able to be her authentic self and an important voice in various social justice movements, Samra's intersectional identity has become the safe home she always wanted as a child.

More summaries and resources for teaching or studying We Have Always Been Here.

We Have Always Been Here from BookRags. (c)2022 BookRags, Inc. All rights reserved.