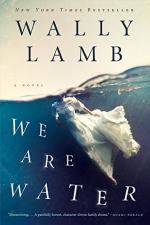 We Are Water Summary & Study Guide

Lamb, Wally
This Study Guide consists of approximately 98 pages of chapter summaries, quotes, character analysis, themes, and more - everything you need to sharpen your knowledge of We Are Water.

We Are Water Summary & Study Guide includes comprehensive information and analysis to help you understand the book. This study guide contains the following sections:

This detailed literature summary also contains Quotes and a Free Quiz on We Are Water by Lamb, Wally.

The following version of this book was used to create this study guide: Lamb, Wally. We are Water. Harper Collins, New York, NY. 2013. First Edition. The book’s narrative frequently shifts perspective and time frame, shifting point of view on a chapter by chapter basis, and within each chapter, moving between past and present.

The book opens with a Prologue in the first-person voice of elderly artist Gualtiero Agnello, speaking to a journalist about various artists, including experimental black painter Josephus Jones (with whom he was acquainted), collage artist Annie Oh (for whom he became something of a mentor), and himself. In his narration, he references being invited to Annie’s upcoming wedding, an invitation he intends to accept.

The book then moves into its first of five parts, in which chapter-by-chapter narration shifts between the first-person voices of Annie Oh and of her ex-husband, Orion Oh. Annie is getting married to the wealthy and influential Viveca, the art dealer who was an early champion of Annie’s work and with whom she has fallen in love. As she prepares for her wedding, Annie contemplates family tensions around the event (particularly with Orion, but also with their son Andrew); her own sense of guilt at having so much of Viveca’s money to spend; and, in particular, recalls her extremely difficult childhood and youth. At the end of Part One, Annie turns the selection of expensive, possible wedding dresses Viveca had purchased for her into her (Annie’s) first work of art in some time.

Orion’s chapters are set within the context of his traffic-slowed trip to Viveca’s beach house, which she is letting him stay in while on a break from his university teaching career. As he waits in traffic, he reflects on various challenging aspects of his childhood, his marriage to Annie, and his more recent past. After settling in at the beach house, he throws a bag of important mementoes into the ocean, following the bag with his wedding ring.

In Part II, the narrative focus shifts into the voice of Ruth Fletcher, a woman who lives in the same town in which Annie was raised, and in which she (Annie) experienced much of the trauma that shaped her life. Ruth reflects on what she knows of Annie’s life, but more importantly reflects on what she knows and remembers of the troubled life and violent death of Josephus Jones.

The narrative focus of Part III shifts again, focusing on the lives and histories of Orion and Annie’s three children – twins Andrew and Ariane, and youngest child Marissa. As they each face the realities of their mother’s impending realities, they are also challenged by their own realities: Andrew’s engagement to a conservative Christian woman; Ariane choosing to have a child with no father in the picture; and Marissa suffering a beating when a sexual encounter goes wrong. At the end of Part III, Andrew breaks up with his fiancé and resolves to go to Annie’s wedding, which he had at first refused to attend.

At the beginning of Part IV, narrative focus shifts again – into the voice of Kent Kelly, Annie’s older cousin. He reflects on his troubled childhood, on how he rescued Annie from the death by flooding that killed her mother and baby sister, and on how he manipulated Annie into a sexually abusive relationship. He also describes his difficult adult life, and how he carried his pedophilia into that life. Meanwhile, Orion is attacked in Viveca’s beach-house; Andrew has a random encounter with Kent, whom he takes to Annie’s wedding; Annie has a meltdown when she sees him, and reveals everything about her abusive past to Andrew; and Andrew goes after Kent, accidentally kills him, and buries him in the well at the back of the family property.

Part V is set three years after the end of Part IV. Its three chapters are written from the first-person perspective of Orion Oh, whose narration reveals that after the attack he became a quadriplegic; that he has made his peace with Annie and Viveca, who are part of his caregiving team; that Ariane, her son, and Andrew all live nearby; and that Orion knows Andrew’s truth. Narration also reveals that Orion is making peace with both his past and his present, with he and Andrew (who is considering confessing to his crime) vowing to support each other as they move into their respective uncertain futures.

More summaries and resources for teaching or studying We Are Water.

We Are Water from BookRags. (c)2022 BookRags, Inc. All rights reserved.