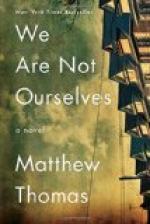 We Are Not Ourselves Summary & Study Guide

Matthew Thomas
This Study Guide consists of approximately 94 pages of chapter summaries, quotes, character analysis, themes, and more - everything you need to sharpen your knowledge of We Are Not Ourselves.

We Are Not Ourselves Summary & Study Guide Description

We Are Not Ourselves Summary & Study Guide includes comprehensive information and analysis to help you understand the book. This study guide contains the following sections:

This detailed literature summary also contains Quotes and a Free Quiz on We Are Not Ourselves by Matthew Thomas.

“We Are Not Ourselves” by Matthew Thomas is the story of Eileen Tumulty Leary. The tale begins when Eileen is ten-years-old. Her father, Big Mike, is a beer truck driver who picks her up after school or dance class every day. They don’t go directly home; rather, they go to his favorite haunt, Doherty’s Bar. Young Eileen sits off to the side and sits alone at a table doing her homework while glancing once in a while at her father who is the most popular patron of the bar. The other guys all look up to him and ask him for his advice or bits of wisdom. Big Mike revels in the attention and believes his own publicity.

Eileen is a bright little girl but is suffering from the dysfunctional marriage of her parents. Big Mike likes to think he can hold his alcohol. He can keep up a front with his buddies at the bar but at home he often turns into an angry and violent man. He doesn’t feel quite as important in the reality of his home as he does in the glow of the artificial admiration of drunken friends at the bar.

Bridget, Eileen’s mother, tries to keep a semblance of normalcy by insisting that dinner is always at 6 p.m. When Mike and Eileen come home late, Bridget locks herself in her room and sulks. Bridget feels some joy in her life when she discovers that she is pregnant with her second child. But the miscarriage sends her in a downward spiral from which there is no return. Like her husband, she turns to alcohol to ease the pain.

Eileen thinks of nothing but escaping, and she is smart and practical enough to know that the best route is through a good education. She finishes college in three years and goes on to get her masters in nursing. Nursing was a natural choice for her since she cared for her drunken parents from a little girl on. A friend introduces Eileen to Ed Leary who is a brilliant scientist and researcher. There is an immediate attraction and soon the two get serious and are planning a wedding. A red flag should have gone up with Ed is angry over the gold watch Eileen gives him as a wedding gift. He says it is a waste of time and a frivolous expense. She is hurt over his inflexibility in this and other matters but she feels certain that he will change in time.

Eileen and Ed have one child, Connell, who they both adore. However, Eileen’s idea of affection is to hector him about his future and his education. It is Ed who has fun with Connell, hugs him and tells him he loves him without hesitation. Eileen envies how easy Ed can show Connell affection. Ed refuses several chances for advancement and promotion because he likes to teach and he’s not concerned about being wealthy. But Eileen wants a big house and money is important to her.

But the goals and dreams of both Eileen and Ed are dashed when Ed begins to show troubling signs that something is wrong with him. Eileen wonders if Ed’s been working too hard, if he’s under a lot of stress at work, or if he’s depressed. But it turns out it’s much worse. When Ed’s behavior continues to worsen, he is checked out by a doctor who gives him the grim diagnosis of Alzheimer’s Disease.

Eileen is dedicated and loyal to Ed during his ordeal. There is no good ending to Ed’s story. He won’t get better or even stay the same. But Eileen never deserts him, works hard to support him and deals with the heartbreaking reality of a disease that destroys the victim along with his loved ones.

More summaries and resources for teaching or studying We Are Not Ourselves.

We Are Not Ourselves from BookRags. (c)2022 BookRags, Inc. All rights reserved.