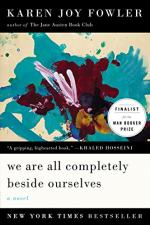 We Are All Completely Beside Ourselves Summary & Study Guide

Karen Joy Fowler
This Study Guide consists of approximately 70 pages of chapter summaries, quotes, character analysis, themes, and more - everything you need to sharpen your knowledge of We Are All Completely Beside Ourselves.

We Are All Completely Beside Ourselves Summary & Study Guide Description

We Are All Completely Beside Ourselves Summary & Study Guide includes comprehensive information and analysis to help you understand the book. This study guide contains the following sections:

This detailed literature summary also contains Quotes and a Free Quiz on We Are All Completely Beside Ourselves by Karen Joy Fowler.

We Are All Completely Beside Ourselves, by Karen Fowler, follows Rosemary Cooke as she comes to terms with her past, her present, and her future. The story, as Rosemary states in the opening chapters, begins in the middle years of her life. Known as Rose in the book, she starts in the middle of stories because she finds those parts to be the most interesting. Rose has been attending college in Davis California for the last five years, still with no idea of what she wants to do with her future. Rose reflects on a strained relationship with her parents. She’s on speaking terms with her mother, but she almost never talks to her father outside of family gatherings. When they do speak, things are always tense. Without giving many details, Rose also hints at two other siblings.

At the cafeteria, Rose watches another student named Harlow fight with her boyfriend, Reg. Harlow starts to make a scene, throwing everything off the tables and flipping chairs. Campus security is quickly called in, but they mistakenly arrest Rose and Harlow. Unsure of what else to do, Rose gets in touch with her father. Thanks to her father and testimony from one of the cafeteria workers, Rose is released. Her father makes her promise to come for Thanksgiving so they can talk more about the arrest.

At Thanksgiving, Rose reveals how tense things are with her family. Her mother’s side of the family dislikes her father because he’s an atheist, as well as a scientist. Rose talks about how her father had a drinking problem in the past. Although it has gotten better in recent years, it tends to come out during the holidays. She goes home with them and is surprised to find that they have moved into another house.

Rose talks with her mother, who ends up giving Rose her personal journals. Rose is surprised by this because their family almost never brings up the past. Unfortunately, she loses her mother's journals on the plane ride back to college. Much to her surprise, Harlow is waiting along with her roommate Todd. Harlow ends up leaving, but takes Rose out to the bar the next day to apologize. Rose calls the airline trying to get her lost luggage. They send the wrong luggage. An even more surprising event occurs when she goes to pick up the luggage from her landlord and she hears that her brother has been looking for her.

Rose has a very strained relationship with her brother, Lowell, whom she hasn’t seen she was eleven. She ominously hints that the only reason she even came to college in California was because this was the spot the FBI had last seen Lowell. Rose begins to talk about her past, mentioning that she has left not only her brother behind, but a sister named Fern also. As the full story of her "left behind" sister is revealed, Rose explains that Fran was not a human sister. She was a chimpanzee the family had raised from birth as part of an experiment. Then, when Rose was five, the family moved, leaving Fern behind.

Rose recalls that when the family moved away and didn’t take Fern, Lowell started to rebel and spent very little time with the family. He ran away during his senior year and joined an animal activist group, which is why the FBI is still after him. Rose remembers that she had such a hard time growing up. When she was younger, she was constantly talking and outgoing, but that was because she was raised alongside Fern. Rose constantly referred to herself as monkey girl, and it took her years to become what she considered normal. Rose suppressed many of her memories about Fern. However, when she sees her brother, she begins to remember everything about the past.

Rose and Fern were incredibly close, but Rose was a jealous five year old who told her family that they had to choose between having her or having Fern. The family chose Rose, and Fern was sent off to a different lab. Lowell had tried to go and free her. With no experience to rely on in such a situation, he was caught and had to run away, leading to him becoming wanted by the FBI. During his short stay, Harlow falls for Lowell. She takes his sudden departure hard and becomes an animal activist herself.

Rose tells her family about meeting Lowell, and they go into greater detail about what happened with Fern. They tell Rose that it wasn’t just her ultimatum, but it was also the fact that Fern was growing and getting stronger which forced them to leave her behind. While she wasn’t malicious, she was beginning to accidentally hurt people. Rose’s family agreed that it wouldn’t be safe to have Fern around the children. So, when Rose made the ultimatum it just made sense to find a lab for Fern.

Rose remembers how much she loved Fern, and she still considers her a sister. It is 2012 when Rose becomes a kindergarten teacher. She moves closer to the lab where Fern is being kept. Using her mother’s journals and pictures from the past, Rose and her mother start to write books about their experiences with Fern. They both visit Fern as often as possible, though the relationship isn’t quite the same anymore. Lowell ends up finally getting arrested by the FBI and charged for all the crimes that he committed.

Rose reflects on how much Fern changed their lives and how their family had fallen apart without her. Rose has learned to embrace her monkey girl side and uses her experiences to become a better teacher, helping the students learn about the unique aspects of conversation and recognizing feelings that Rose learned from her time with Fern.

More summaries and resources for teaching or studying We Are All Completely Beside Ourselves.

We Are All Completely Beside Ourselves from BookRags. (c)2022 BookRags, Inc. All rights reserved.