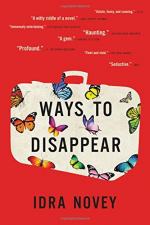 Idra Novey
This Study Guide consists of approximately 37 pages of chapter summaries, quotes, character analysis, themes, and more - everything you need to sharpen your knowledge of Ways to Disappear.

This detailed literature summary also contains Quotes and a Free Quiz on Ways to Disappear by Idra Novey.

The following version of this book was used to create this study guide: Novey, Idra. Ways to Disappear. Little, Brown and Company, 2016.

The novel opens in Rio de Janeiro, Brazil. Brazilian fiction author Beatriz Yagoda is seen climbing into an almond tree, and after that day, she is reported missing. Emma Neufeld, who has worked with Beatriz over the years to translate her works into English, decides that she must go to Brazil and look for Beatriz, whom she regards as an intimate friend. Her fiancé, Miles, urges her not to go, but Emma does not heed his advice. In Brazil, Emma meets Flamenguinho, a loan shark who says that Beatriz owes him $600,000, which she borrowed to feed her addiction to online poker. Later, Emma meets Beatriz’s fully-grown children: Raquel and Marcus. Raquel dislikes Emma and tells her to go home, saying she has no business with their family affairs, but Emma disagrees. Emma tells them about Flamenguinho, and when they look at Beatriz’s Internet history, they see that it is full of online poker sites.

Emma says that climbing into an almond tree is a reference to one of Beatriz’s novels, where a man climbs into an almond tree and goes to the island of Ilha Grande. Emma and Marcus take a ferry to Ilha Grande to look for Beatriz, but they do not find her. Meanwhile, Raquel finds an unfinished manuscript written by Beatriz in Beatriz’s apartment. Also during these events, Roberto Rocha, who is Beatriz’s friend and former publisher, receives a letter from Beatriz asking for money. He agrees to send the money to her. On the ferry ride back from Ilha Grande, Emma and Marcus realize that they have fallen in love, and they begin to kiss. They return to the apartment to have sex, but Raquel catches them in the act and grows furious. Raquel tells Emma to leave, and before Emma leaves, she finds a letter in the apartment addressed to Beatriz and written by Roberto Rocha. Emma goes to Roberto’ office and is told he has taken a trip to the Brazilian city of Salvador. Emma books a flight to Salvador and spends her time there looking for Roberto. In Salvador, Emma runs into Raquel and Marcus, who are also looking for Roberto.

While in Salvador, Emma receives an e-mail from Flamenguinho that says he will kidnap Marcus if he does not receive money soon. Emma meets with Raquel to discuss the e-mail. Raquel gives Beatriz’s unfinished manuscript to Emma. Later, when Raquel, Emma, and Marcus are eating in a restaurant, men run in to the restaurant and kidnap Marcus. Emma later receives Marcus’ severed ear in a package, along with a note from Flamenguinho saying that he will continue to mutilate Marcus if he does not receive money. Emma and Raquel find Roberto, and they give him Beatriz’s unfinished manuscript in exchange for money, which they can use to pay Marcus’ ransom. They send the money to Flamenguinho, who then sets a time and location for Marcus’s return. Emma and Raquel go to the appointed place—a specific alley—and a shadowy figure enters the alley with Marcus. Raquel tries to shoot the figure, but accidentally shoots Marcus instead. The figure flees, and Emma and Raquel call an ambulance in time to save Marcus. Meanwhile, Roberto flies back to Rio, edits the manuscript, and publishes it.

Emma visits Marcus in the hospital, they tacitly declare their love for one another, and Emma breaks off her engagement with Miles. Meanwhile, Roberto finds that Flamenguinho has kidnapped Alessandro, who is Roberto’s boyfriend, so Roberto hires a hit man to kill Flamenguinho and return Alessandro to safety. The hit man successfully does so. Later, Roberto tells Raquel that he thinks Beatriz may be hiding on the island of Boipeba. This is true, but Beatriz unfortunately dies in an accidental fire, and Raquel witnesses the flames. A funeral service, organized by Roberto, is later held for Beatriz. Among the attendants are Raquel, Marcus, and Emma. The novel closes with a description of Emma, who has decided to stay in Brazil. She has found work as a professor at a university in Rio de Janeiro.

More summaries and resources for teaching or studying Ways to Disappear.