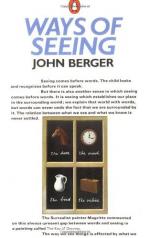 Ways of Seeing Topics for Discussion

John Berger
This Study Guide consists of approximately 43 pages of chapter summaries, quotes, character analysis, themes, and more - everything you need to sharpen your knowledge of Ways of Seeing.

Identify and define the differences that the author describes between naked and nude.

Describe and discuss the author's interpretation of the environment in which an oil painting is viewed.

Describe the awareness that develops after one realizes he can see. Describe and discuss situations in your own experience that fit the awareness.

Describe some of the significant aspects of how the camera changed how one sees. How does its use relate to new perspectives in Cubism?

Describe and discuss how a man sees differently than a woman.

How does publicity function as an example of an image?

Describe and discuss how the development and appreciation of oil paintings has changed since its beginning around 1500.

Describe, list, and discuss the perceptual differences that occur in one's thoughts and perceptions by imagining a traditional European nude such as Titian's Venus if it were redone by him...

More summaries and resources for teaching or studying Ways of Seeing.