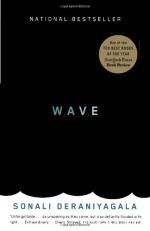 NOTE: All citations in this Study Guide refer to the Kindle version of Wave, published March 5, 2013.

In her memoir Wave, Sonali Deraniyagala shares the true story of the tsunami in Sri Lanka that killed her husband, two sons, and parents. As the only one in her family who survived the wave, Deraniyagala fought through her grief and depression to find a new identity for herself. Her story covers a period of seven years as she tries to make sense of what happened and learn to deal with her grief.

Deraniyagala begins her story by describing the morning of the tsunami. She, her family, and her parents were staying at the Yala Safari Beach Hotel on December 26, 2004, where they had spent several days during the Christmas holiday. They planned to return to her parents’ house later that day. With little warning, the tsunami overtook the beachfront area of the national park.

Deraniyagala describes the horror on her husband’s face just before the tsunami flipped the Jeep in which they were trying to outrun the strangeness they had noticed in the ocean. Deraniyagala was carried along with the churning water until she managed to grab onto a branch. This branch kept her from being swept out to the ocean in the receding waters.

From this point, Deraniyagala describes how she seemed to know her family was dead even though she did not yet have proof. She was in shock as she waited in the hospital for news. A friend finally took her to her aunt’s house in Colombo.

Deraniyagala found out in only a few days that her parents and oldest son had died in the wave but it was nearly four months before she got confirmation that her husband and youngest son were dead. Her first months after the tsunami were a blur of grief and pain. Deraniyagala abused herself by using drugs and alcohol to numb her pain.

Deraniyagala slowly made progress in her process of healing as she first visited her parents’ home in Colombo and then returned to London. It was nearly four years after the tsunami before Deraniyagala was able to go into the home she shared with her family in London.

Although she suffered a setback when she first traveled to New York City, Deraniyagala discovered that the city was a good choice to help her deal with her grief. At first, the city gave her a place where she was distanced from the things that reminded her of her family. As time went by, Deraniyagala realized she could better rediscover her family from the safety of that distance. She ends her story telling her reader she can hear her boys, at the age they would have been seven years after the tsunami, laughing in their garden in London.