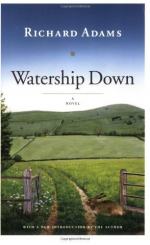 Books Like Watership Down by Richard Adams | Suggested Reading

Richard Adams's The Plague Dogs (1978) tells of the adventures of two dogs who escape from an animal experimentation laboratory.

In Richard Adams's heroic saga of a mythical past, Shardik (1975), people worship a giant bear.

Traveller (1988), by Richard Adams, tells the story of the Civil War from the point of view of General Robert E. Lee's horse, whose name was Traveller.

In Brian Jacques's Redwall (1998), the one-eyed rat warlord, Cluny the Scourge, is hell-bent on destroying the tranquillity of Redwall Abbey as he prepares to fight a bloody battle for its ownership.

Mossflower, by Brian Jacques (1998), is the story of how mouse Martin the Warrior and his woodland friends fight ruthless wild cats for leadership of the abbey and Mossflower...