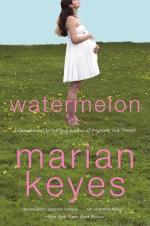 Marian Keyes
This Study Guide consists of approximately 42 pages of chapter summaries, quotes, character analysis, themes, and more - everything you need to sharpen your knowledge of Watermelon.

This detailed literature summary also contains Topics for Discussion and a Free Quiz on Watermelon by Marian Keyes.

Watermelon by Marian Keyes is a humorous and yet very dramatic story about love. The novel deals with marriage and a myriad of other relationships. The main character in the story is Claire Webster. Her thoughts, desires, and actions propel the story forward from the beginning. However, it is unfortunate circumstances that cause her initial decision, which is to move back home to Dublin to sort her life out.

Watermelon begins with Claire, twenty-nine, in hospital in London, England. She has given birth to a new baby girl. Within a few hours of that birth, her husband James enters the hospital room to inform her that he is leaving her for another woman. He is running out on Claire and their firstborn child for an older married woman who lives in the same apartment complex as they do. Claire makes the decision to head to her ancestral home in Dublin, Ireland, with her baby. This is where her parents and sisters live.

Once in Dublin, Claire must deal with a home environment she left more than six years ago when she married James. There's her father and mother, and her sisters Anna and Helen who still live at home. Claire once again experiences all the joys and troubles that go with being part of a lively and unique family. In Dublin, Claire initially wallows in deep despair. She cannot fathom why her husband left her for another woman and abandoned her child as well. She wonders if it was the lack of intimacy between them during the pregnancy. She wonders if maybe James didn't really want a child. She strives to understand what drove him into the arms of another woman.

Claire goes through different stages of emotions while in Dublin. All the while, her family lives their life around her. One day, her youngest sister, Helen, brings home a handsome young man from college, who will help her with her studies. His name is Adam and he's twenty-four. Upon meeting him, Claire has an immediate attraction to him. Through a series of maneuverings, meetings, discussions and such, they eventually, one day, end up at Adam's flat, where they make love.

Things become more complicated for Claire. James, her husband, shows up in Dublin to attempt a reconciliation with her. He shows up the day that Claire made love to Adam, and is staying at a hotel. Claire must decide whether she wants to pursue a relationship with Adam, or work things out with James. She feels she should try to patch things up with James for their daughter's sake. Claire has named her daughter Kate, after her grandmother on her mother's side.

Through meetings and discussions with James, and meetings and talks with Adam, Claire makes her decision. She decides she will leave James for good. She will work on building a love relationship with Adam. James will not accept responsibility for the affair he had. He says that Claire, through her demands on him and selfishness, drove him to have an affair. He won't admit that he was wrong. He turns the tables and makes it like he is a victim, and that Claire must change her ways if the marriage is to work. Claire does not fall for this line of reasoning. She knows she is not the devil James is making her out to be. She knows that she cannot be with him if he cannot see what he did wrong.

Claire is set to move back to London now, with her daughter, and go back to work. Adam will go to London as well. He has secured a job in London and will have with him a child he had from a previous relationship. His ex-girlfriend is travelling for a year and Adam will take care of the child for the year. He and Claire are now free to grow their relationship as they embark on a new stage of life in London.

More summaries and resources for teaching or studying Watermelon.