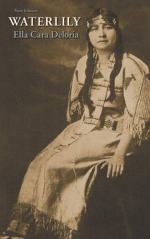 Ella Cara Deloria
This Study Guide consists of approximately 35 pages of chapter summaries, quotes, character analysis, themes, and more - everything you need to sharpen your knowledge of Waterlily.

This detailed literature summary also contains Topics for Discussion and a Free Quiz on Waterlily by Ella Cara Deloria.

This is a novel about the lives and customs of the Dakota women told from the perspective a young girl named Waterlily. The reader follows Waterlily through her journey from infancy to adulthood, through her joys and heartaches, until she ultimately finds true love.

Soon after Blue Bird and Waterlily are back with their own camp circle, Blue Bird meets Rainbow, and the two are married. Waterlily's new grandmother, Gloku, loves her very much, and treats Waterlily just like one of her own grandchildren.

Rainbow takes his family to visit his friend, Palani. There is a Sun Dance celebration going on at Palani's camp circle when Rainbow and his family get there, and Waterlily and her cousin, Prairie Flower, get to participate in the festivities. While at the festival, Waterlily sees a young boy who is part of a ceremony where he dances and prays. The young boy has promised the Great Spirit that if he spare his father's life, he will sacrifice one hundred pieces of flesh at the festival. Waterlily is so touched by the boy's sacrifice that she tries to bring him some water, which is forbidden. When he refuses the water, Waterlily runs away. Waterlily and her family leave the festival without ever seeing the young boy again.

Soon after returning to their own camp circle, Waterlily's grandmother, Gloku, dies. Waterlily's uncle has two very beautiful and strong American horses he is saving to give as gifts in Gloku's name, but the horses are stolen. Waterlily is asked by a boy she has never met or even seen to be his wife. The boy's family is going to give Waterlily's family two horses in exchange for her marrying the boy. Waterlily agrees to the marriage because she loves her grandmother so much and wants her uncle to be able to have the horses to give as gifts.

More summaries and resources for teaching or studying Waterlily.