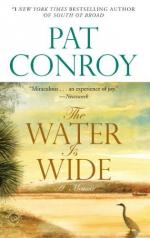 Pat Conroy
This Study Guide consists of approximately 41 pages of chapter summaries, quotes, character analysis, themes, and more - everything you need to sharpen your knowledge of The Water Is Wide.

The Water Is Wide Summary & Study Guide includes comprehensive information and analysis to help you understand the book. This study guide contains the following sections:

This detailed literature summary also contains Related Titles and a Free Quiz on The Water Is Wide by Pat Conroy.

The Water is Wide is the story of Pat Conroy's experiences teaching for two years on the island of Yamacraw off the South Carolina coast. Pat documents his challenges not only with the underserved children living there but also with the administrators hired to educate them and elevate their lives.

In 1969, Pat Conroy waits to hear of his acceptance into the Peace Corps and hoping not to hear from the draft board which could send him to the war in Vietnam. When no word comes from either group, Pat applies for a job at a school on Yamacraw Island off the coast of South Carolina. Pat has spent a year teaching high school in Beaufort, South Carolina, where he himself went to high school but feels the need to do something for children who may need Pat's personal style and methods of humanitarian teaching.

Pat is rebellious not only in his teaching methods but also in his drive to take over the all-black class of seventh and eighth graders during a time of heated racism in the South. Pat admits to minor acts of racism as a boy and his growing up in a household and educational system where segregation rules. Pat's college days introduce him to new ideas and new friends who reject racism and vow to alter the system in ways that will impact people's lives.

Pat's willingness to take on the undesirable teaching position on Yamacraw at first meets with delight from the superintendent who believes Pat to be an answer to many prayers, and Pat is happily up for the challenge. What Pat finds at the school, though, would shock even the least results-oriented instructor. The children at the Yamacraw school are so isolated that their speech patterns, ignorance, and lack of fundamental information are glaring. After taking inventory of the woefully inadequate skill levels of the students, Pat realizes he cannot use traditional methods of instruction and eschews books for more interactive participation lessons.

Pat also takes the children on trips to the mainland to give them some exposure to the outside world, and the children change dramatically in their views toward learning. Pat's unusual teaching methods bring scorn from the other teacher on the island and eventually from the school's administrators.

Pat is fired from his teaching job but enlists the help of the parents who petition to retain Pat and he returns to teach for another year. Pat continues to use his unique teaching style and finds himself in trouble with the school's administrators once again. Pat is once again terminated and even the support of the parents does not help this time. Pat hires an attorney to fight a wrongful termination case, and the judge upholds the school district's decision to fire Pat even though the judge feels Pat's indiscretions do not warrant dismissal. It is the right of a school administration to fire any teacher it feels to be unfit for the position.

Pat philosophizes that he should have learned to be more obsequious toward the school's establishment in order to retain his position. As it is, Pat's self-respect is intact but he is not able to help the children. Pat also knows he was not able to dramatically change the knowledge levels of his students in the brief time he spent with them but hopes he has given them some experiences that will make their transition to the outside world just a little easier when that time comes.

More summaries and resources for teaching or studying The Water Is Wide.

The Water Is Wide from Gale. ©2005-2006 Thomson Gale, a part of the Thomson Corporation. All rights reserved.