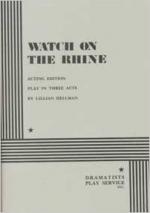 Introduction & Overview of Watch on the Rhine

Watch on the Rhine Summary & Study Guide includes comprehensive information and analysis to help you understand the book. This study guide contains the following sections:

This detailed literature summary also contains Bibliography on Watch on the Rhine by Lillian Hellman.

After a critically acclaimed opening at the Martin Beck Theatre in New York in 1941, Watch on the Rhine ran for 378 performances. Pamela Monaco, in her article on Lillian Hellman for the Dictionary of Literary Biography, notes that the play's appearance at this historical moment, eight months before the Japanese attack on Pearl Harbor, responded to "the political climate of the day," entering into "the continuing debate on American neutrality." She concludes that Americans were already familiar with the Nazi threat but had never before imagined "an antifascist message within a domestic situation." Monaco argues that through her skillful dramatic crafting, Hellman warns that all "who chose to ignore the international crisis were helping to perpetuate it and that no one [could] count himself or herself free of danger." Katherine Lederer, in her article on Hellman for Twayne's United States Authors Series Online stated that it was the "right timefor Hellman, for the critics, and for the public. The reviews were glowing, and President Roosevelt ordered a command performance at the National Theater in Washington." In its depiction of a family who struggles to combat the menace of fascism in Europe during the Second World War, Watch on the Rhine emerges as a tribute to those who are willing to sacrifice their lives for a noble cause.