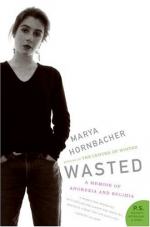 Wasted: A Memoir of Anorexia and Bulimia Summary & Study Guide

Wasted: A Memoir of Anorexia and Bulimia Summary & Study Guide includes comprehensive information and analysis to help you understand the book. This study guide contains the following sections:

This detailed literature summary also contains Topics for Discussion and a Free Quiz on Wasted: A Memoir of Anorexia and Bulimia by Marya Hornbacher.

Wasted: A Memoir of Anorexia and Bulimia recalls Marya Hornbacher's personal nine-year battle with anorexia and bulimia. In the story, Marya details childhood and personality factors that may have had a role in the development of her disorder. She also writes about the progression of her bulimia and her transition to anorexia. Marya describes her plummet to her lowest point in her struggle with anorexia, a time when she is eating almost nothing and weighs only 52 pounds. Finally, Marya describes the circumstances that finally convince her to check herself into a hospital for treatment.

Even as an infant and child, Marya writes that she has strange eating habits. She has her first experience with bulimia when she is nine years old. No one has even talked to Marya about bulimia; she discovers on her own that there is a way to get rid of any food she has eaten. Throughout her high school years, Marya suffers with bulimia. It is in her tenth-grade year when Marya attends a boarding school when she decides to make the transition to anorexia. Immediately following this school year, she is hospitalized the first time for her disorder. Marya writes that instead of getting better while in treatment, she gets worse. She convinces her parents to let her go to California and live with her stepmother when she is released from treatment.

Once in California, Marya begins binging and purging again. During the short while she stays in California, she manages to lose weight to a point that she is lighter than when she first enters the hospital for treatment. Marya is once again hospitalized, but discharged when her vital signs stabilize and insurance stops paying for her treatment. Within one week, Marya loses twelve more pounds and is readmitted to the hospital on emergency status. This time Marya is sent to Lowe House, a residential treatment center where Marya comes closest to being healed. As a result of her fear of facing herself, however, Marya lies about being molested as a child and sabotages her own recovery.

After her release from Lowe House, Marya's anorexia begins to resurface slowly. Finally, while taking classes at American University, Marya drops to her lowest weight of 52 pounds. Marya's father takes her to the hospital emergency room. Marya at first refuses to be checked in for treatment, but after realizing how weak she really is, signs herself into the hospital for treatment.

Throughout her book, Marya analyzes her own eating disordered behavior. She contends that eating disorders are not as simple as some people would like to think. Marya reasons that there are a variety of factors, including heredity, genetics, personality, culture and upbringing that work in unison to cause the disorder. Marya intends her book to be a warning to other girls not to follow the path that she took.

Wasted: A Memoir of Anorexia and Bulimia from BookRags. (c)2022 BookRags, Inc. All rights reserved.