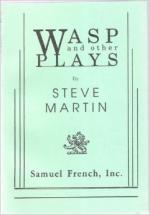 Like WASP, The Zig-Zag Woman, Patter for the Floating Lady, and Guillotine are one act plays by Martin. WASP was first staged along with these three other plays, and they were published together in 1998.

The full-length comedic drama Picasso at the Lapin Agile (1996) was Martin's first play to be staged. It was a great success with both audiences and critics.

Some critics compare Martin's dramatic style to the absurdism of playwright Samuel Beckett. Beckett's most well-known absurdist work is Waiting for Godot (1952). Despite his English-language Irish background, Beckett wrote most of his works in French, before translating them into English. Beckett lived in Paris most of his adult life, and Waiting for Godot was first staged there in 1953.

A Room with a View (1908), by the British novelist E. M. Forster, is about a group of Britons on vacation in Italy...