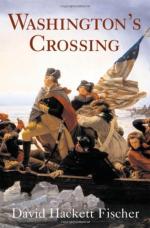 David Hackett Fischer
This Study Guide consists of approximately 26 pages of chapter summaries, quotes, character analysis, themes, and more - everything you need to sharpen your knowledge of Washington's Crossing.

This detailed literature summary also contains Topics for Discussion and a Free Quiz on Washington's Crossing by David Hackett Fischer.

Washington's Crossing is a story of a young nation forging its way toward independence. It is a story of freedom, liberty, discipline, leadership, and perseverance. George Washington comes across as a true war hero and leader. Through the bleakest days of the Revolution, Washington continued to rally his men and lead them to much-needed victories without which their cause would have failed. As Washington plots and plans his army's journey to victory, the foundation is laid for the future United States of America.

The story begins at a low point in the Revolution. Although the Americans won some battles, they were only a prelude to what was to come. Some of the most crushing defeats occurred at this point. Working off of misguided intelligence, the American army marched into defeat after defeat in New York. Time and again, they managed to escape and regroup to attack another day. After the fall of New York, the darkest days were yet to come as the army was forced into a retreat across New Jersey.

The British and Hessians proved to be formidable enemies. Several factors worked in their favor at the beginning. Both armies were lead by highly organized and disciplined aristocrats. The American army in contrast, was not. A big factor that led the enemy armies to win was accurate intelligence. This, along with order and discipline, made it easy for them in the beginning. Additionally, they did not believe that the American army posed enough of a threat. This overconfidence would be part of their downfall.

As the Americans retreated through New Jersey, Washington prepared for his attack on Trenton. The winter months arrived and the British and Hessians planned to settle in for winter quarters. An attack from the Americans was the last thing they imagined happening. Washington wanted to use this to launch a surprise attack and turn the war in their favor. Washington's army crossed the Delaware River in treacherous weather on Christmas night, 1776. Though the odds were against them, the Americans succeeded in crossing the river and surprising their enemy. Their hard-earned victory was solidified a few days later after a second attack forced the enemy to retreat from Trenton. The Americans continued to push the enemy east and back out of New Jersey.

The American army fought the overwhelming odds against them to win these pivotal battles. The relationship changed between them and Washington. They became better soldiers and he became a better leader. Some of his methods would later be used once the presidency was established. The war intelligence also improved which aided in the Americans' victories. Above all else, it was the determination and perseverance of Washington's soldiers that lead the Americans toward ultimate victory.

More summaries and resources for teaching or studying Washington's Crossing.