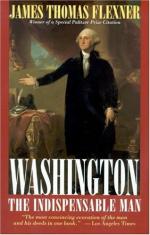 Plot Summary
+Chapters Summary and Analysis
A Powerful Apprenticeship, A Clumsy Entrance on the World Stage and Love and Massacre
Desperation and Disillusionment, George Washington's First War and A Virginia Businessman
Washington in His Landscapes, A New Call to Arms and A Virginian in Yankee-Land
An Early Triumph, The Continental Army on Trial and Depths
Heights, The Loss of Philadelphia and The Conway Cabal
The Road Turns Upward, Hope Abroad and Bankruptcy at Home and Enter a French Army
Treason, Virginia Endangered, Yorktown and A Gulf of Civil Horror
Goodbye to War, Pleasures at Home and Canals and Conventions
The Constitution of the United States, Hysteria and Responsibility and A Second Constitutional Convention
The Social Man, Infighting Foreshadowed, The Great Schism Opens and Europeans and Indians
Desire to Escape, No Exit, Bad Omens and Earthquake Faults
A French Bombshell, Trouble All Around, A Tragic Departure and Opposite Hands Across the Ocean
The Whiskey Rebellion, The Democratic Societies, A Disastrous Document and Tragedy with a Friend
Downhill, Washington's Farewell Address, The End of the Presidency and Home Again
Mental Confusion, Politics at Sunset, Washington and Slavery and Death of a Hero
Free Quiz
Characters
Objects/Places
Themes
Style
Quotes
Topics for Discussion
Order our Washington, the Indispensable Man Study Guide

James Thomas Flexner
This Study Guide consists of approximately 41 pages of chapter summaries, quotes, character analysis, themes, and more - everything you need to sharpen your knowledge of Washington, the Indispensable Man.

This detailed literature summary also contains Topics for Discussion and a Free Quiz on Washington, the Indispensable Man by James Thomas Flexner.

Washington, the Indispensable Man by James Thomas Flexner is a nonfiction account of George Washington's life from his birth in 1732 until his death in 1799. Born of notable British lineage, Washington adopts the principles of American independence and becomes the leader of the Revolutionary Army and ultimately the first President of the United States. While most of the expected events and information are present, the book also sheds light on some of Washington's personal habits, loves, and feelings to provide a fuller picture of Washington the man and not just Washington the icon.

Not born into wealth, Washington learns early that hard work will be his way out of his situation. The hope of attending school in England is quashed with the death of his father when Washington, the oldest of five children from his father's second marriage, becomes the emotional crutch of a domineering mother. Washington manages to escape into rugged adventures in unexplored territories, where he gains military prowess and knowledge of primitive fighting. Washington soon becomes a surveyor and buys property in Virginia, securing some financial security for himself.

Washington dallies in first love with a flirtation with Sally Fairfax, the wife of a neighboring Englishman, but Washington ultimately marries Martha Dandridge Custis, a wealthy widow. Washington now has sufficient funds to purchase a major estate, Mount Vernon, and settles into the domestic life of a planter.

Duty calls when Washington is named head of the Continental Army to lead the new American states in the battle for independence against Great Britain. Although never fully convinced of his own capabilities, Washington's strategic mind and surprise tactics eventually win the war. Washington also wins the hearts of his soldiers because of his empathy for their conditions during bleak periods in the war. This admiration reaches across military lines to the general public and Washington is voted in as first President of the United States.

Constantly torn between duty to his country and his longing to work the lands of Mount Vernon, Washington never shirks responsibility in either area, although the years away from Mount Vernon take their toll on the estate. When returning home after eight years as President, Washington finds Mount Vernon in disrepair and his coffers in a sorry state. Plagued by setbacks that will take years to reverse; Washington begins the repairs and sells off some of his unsettled lands in the Ohio and Northwest Territories to keep the estate solvent.

This book presents a full view of George Washington as a son, husband, and stepfather as well as the Revolutionary War hero and national icon so typically portrayed in other books.

More summaries and resources for teaching or studying Washington, the Indispensable Man.