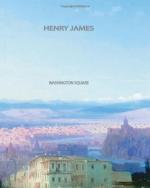 This detailed literature summary also contains Topics for Discussion and a Free Quiz on Washington Square by Henry James.

Washington Square is a novel by Henry James. In this novel, Catherine Sloper is a simple, unattractive girl whose father fears her fiancé is interested in her only because of the money she has inherited from her mother and will inherit upon her father's death. Dr. Sloper convinces his daughter of this fact and encourages her to break off the engagement, but she refuses. However, when Catherine has a falling out with her fiancé and he disappears within days of telling Catherine's aunt he intends to end their relationship, Catherine believes she has been jilted by a coward. Catherine draws in upon herself, refusing to marry anyone else and refusing to forgive her father for his role in the breakup as well. Washington Square is a romance that is more tragic than inspiring, a story of the dangers of a man's influence on the opinions of the woman in his life.

Dr. Sloper married a woman with her own money out of love. Together they have a perfect life that is made richer when a son is born. However, tragedy strikes when that son dies a few years later. Dr. Sloper's wife gives birth again, but he is disappointed when this child is born a girl. Not only this, but Dr. Sloper's wife dies a week later, leaving him alone to raise this child.

Dr. Sloper's sister, Mrs. Penniman, moves into his house to help care for the child for a short time and ends up staying indefinitely. As Dr. Sloper's daughter, Catherine, grows older, he begins to fear that his romantic sister will push her into romances that are inappropriate for her. This fear grows as Dr. Sloper becomes aware that his daughter is not only unattractive, but that she lacks the intelligence of her mother and himself. Therefore when Catherine meets Morris Townsend at a party for his niece's upcoming nuptials, Dr. Sloper is not surprised by Mrs. Penniman's excitement and encouragement of the relationship.

For several weeks Morris Townsend comes to the Sloper home to visit Catherine. Catherine falls deeply in love with Mr. Townsend and is therefore pleased when he expresses a desire to marry her. However, this happiness begins to wane when Catherine becomes aware that her father dislikes Mr. Townsend and has no intention of giving his blessing to their nuptials. Mrs. Penniman suggests to Mr. Townsend that he prove his devotion to Catherine by eloping with her. Mrs. Penniman insists this will prove he does not care for Dr. Sloper's money, therefore causing the doctor to like Mr. Townsend and give his consent to the union.

Mr. Townsend suggests eloping to Catherine and is surprised when she quickly agrees. Mr. Townsend worries, however, that by eloping he will be forced to accept Catherine with only the inheritance from her mother and nothing more. As Mr. Townsend waffles in his promises, Dr. Sloper suggests that he take Catherine to Europe for six months before she elope. Catherine agrees. The trip, which is extending to a year, does nothing to change Catherine's determination to marry Mr. Townsend.

Seventeen years pass and Dr. Sloper becomes ill, dying from pneumonia. Catherine learns that Dr. Sloper has cut her inheritance to nearly nothing because she refused to promise she would not marry Morris Townsend. However, when Mr. Townsend comes to her two years later, at Mrs. Penniman's suggestion, Catherine refuses to even consider a friendship with him.