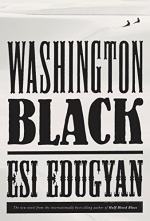 Esi Edugyan
This Study Guide consists of approximately 36 pages of chapter summaries, quotes, character analysis, themes, and more - everything you need to sharpen your knowledge of Washington Black.

The following version of this book was used to create this study guide: Edugyan, Esi. Washington Black. New York: Alfred A. Knopf, 2018.

The novel opens in 1830 on Faith plantation in Barbados. The plantation is owned by a wealthy English family named Wilde. The narrator and protagonist, George Washington “Wash” Black, is a slave who was born on the plantation in the year 1818. The master of the plantation is Erasmus Wilde, who is cruel and sadistic towards the slaves. Kit—a female slave who takes care of Wash—says that she and Wash will be reincarnated in Africa after they die. One day, Erasmus’ younger brother, Christopher “Titch” Wilde—arrives on the island. He is a scientist and inventor, and he hopes to test his new hot air balloon design on a nearby mountain. Titch is much kinder than his cruel brother. Erasmus is annoyed and resentful by Titch’s presence.

Titch enlists Wash as an assistant, and he teaches Wash to read, write, and draw. Wash is fascinated by drawing. Titch also enlists the help of some of the plantation slaves in helping to build the hot air balloon. One day, due to an accidental gas explosion from the balloon, Wash suffers burns on much of his face and body. Titch and Erasmus’ cousin Philip comes to visit. Philip suffers from depression and soon kills himself. Titch realizes that Erasmus will likely accuse Wash of killing Philip and will kill Wash as a means of spiting Titch. Titch and Wash escape using the hot air balloon and then gain passage by boat to Norfolk, Virginia. There, a kind sexton named Edgar Farrow gives them temporary shelter. Erasmus hires a bounty hunter to pursue Wash. Titch and Wash travel north to Canada, where they meet with James Wilde, Titch’s father, who is on a scientific expedition. After James refuses to help secure Wash’s safety from Erasmus, Titch devolves into a frenzy of despair and wanders off into the wilderness.

Titch travels to Nova Scotia to hopefully live and work in peace. He is about 16 years old by that time. The British Empire abolishes slavery, but Wash still witnesses and experiences instances of racial tension and persecution. Wash befriends a young woman named Tanna Goff, who is from England. Her father is famed marine zoologist Geoffrey Goff, who is in Canada collecting specimens for an exhibition in London. Goff hires Wash as an assistant and illustrator. John Willard, the bounty hunter hired by Erasmus, finds and attacks Wash, despite the fact that slavery has been abolished and Erasmus has died of illness. After Willard claims that Titch is alive and in England, Wash escapes. A romance begins to develop between Tanna and Wash. Wash conceives of having an exhibition of live sea creatures in London. Wash and the Goffs return to London to execute this plan.

In London, Wash begins to search for and make inquiries about Titch. He learns of Peter Haas, a friend of Titch’s who lives in Amsterdam and with whom Titch may have been in recent contact. Wash and Tanna go to Amsterdam to meet with Peter, who says that Titch is currently living in Marrakesh, Morocco. In Morocco, Wash finds Titch living as a hermit and continuing his studies. Due to a strange out-of-body experience following Titch’s abandonment of Wash, Titch has also taken an interest in spiritual matters. Titch and Wash converse and attempt to reconcile, although it is unclear whether or not they reach a full reconciliation regarding their shared past.

More summaries and resources for teaching or studying Washington Black.