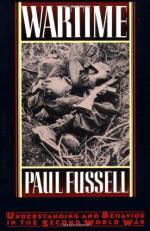 Paul Fussell
This Study Guide consists of approximately 26 pages of chapter summaries, quotes, character analysis, themes, and more - everything you need to sharpen your knowledge of Wartime.

Wartime: Understanding and Behavior in the Second World War Summary & Study Guide includes comprehensive information and analysis to help you understand the book. This study guide contains the following sections:

This detailed literature summary also contains Topics for Discussion and a Free Quiz on Wartime: Understanding and Behavior in the Second World War by Paul Fussell.

The author presents a critique of the culture and literature produced during and after World War II, often using the Great War as a contrasting phenomenon. The focus on culture and literature suggests that these aspects of human existence effectively mirror common existence. The author develops each chapter as a topical examination of a particular aspect of wartime understanding. Subsequent chapters tend to further develop themes or topics presented early in the book. The basic premise of the book is that war—particularly World War II—is not about anything intelligible, does not construct any significant meaning, and is too violent to comprehend. The book briefly examines several commonly held beliefs about the rationale of World War II and dispels them as localized paradigms without enduring validity when applied to the entire scale and scope of the conflict. The book also considers the ultra-violent modern battlefield where confusion and chaos are rampant and logical thought is worse than useless. The book finally suggests that modern warfare is too violent and too complex to be about any definable thing. This horrific truth is subsequently ignored by most participants amidst a concerted effort to construct artificial meaning around prolonged, violent, and senseless mass events. This is because people like meaning and prefer to experience the world in a way that can be seen as rational.

During World War II, several techniques were utilized to construct a shield of meaning around World War II to isolate the senselessness of warfare from public support for the war effort. Politicians and military leaders seemed to realize that if the general public became cognizant of the entire wartime combat experience they would not support future war efforts. For the most part, public and private media reporting self-censored to align with official military reporting about the war effort. The war thus become constructed in the media as a high-minded affair, a sort of Herculean 'good-v-evil', or 'us-or-them' effort that demanded significant sacrifice in all aspects of life. Meanwhile, military conscripts were subjected to an endless process of official hazing—the author refers to it as 'chickenshit'—meant to demean them and assert the complete ownership of conscripts by the established military power. Faced with such constant institutionalized hazing and the inconceivable violent and destructive reality of wartime experience, it is not surprising that most soldiers were unable to mentally survive more than a few months time in combat. Secondary effects include rumor-mongering and the creation of idiomatic expressions—both topics considered in the book. The basic of thesis of the text is developed topically by enumerated and named chapters. The book is presented in a scholarly format with several photographs and extensive end notes. The book successfully defends its thesis, defying the conventional wisdom that World War II was about freedom and national identity, and that it was fought by America's greatest generation.

More summaries and resources for teaching or studying Wartime: Understanding and Behavior in the Second World War.