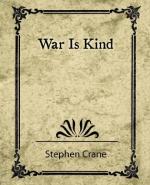 Introduction & Overview of War Is Kind

Stephen Crane
This Study Guide consists of approximately 21 pages of chapter summaries, quotes, character analysis, themes, and more - everything you need to sharpen your knowledge of War Is Kind.

"War is Kind" is the first poem of Stephen Crane's second collection of poems, War is Kind and Other Lines, published in 1899, less than a year before he died. The poem is sometimes referred to by its first line, "Do not weep, maiden, for war is kind." The subject of the poem is war and its effects. In this way it echoes the stories and scenes from Crane's Civil War novel, The Red Badge of Courage. Though Crane had been turned down because of poor health when he volunteered to enlist in the U.S. Navy, he saw his share of war and death as a journalist, covering conflicts in Greece, Puerto Rico, Cuba, andSpain. When Crane published War is Kind and Other Lines he and his wife, Cora, were deeply in debt. Having already established his literary reputation at 23 as the author of The Red Badge of Courage and many newspaper stories on wars around the globe, Crane was able to secure an advance for the collection.

Many of the short parable-like, densely imagistic lyrics in the collection deal with God's absence, the indifference of nature, the ironies of war, and the vagaries of love. "War is Kind" itself is a 26-line poem in five stanzas focusing on the emotional loss of three women whose lover, father, and son, respectively, have died in war. Crane's detailed snapshots of the fallen men in the first, third, and fifth stanzas evoke the savagery of war and its inherent cruelty. The indented second and fourth stanzas function as the poem's chorus, and provide more generalized images of war and cutting statements about the military. The poem's speaker, simultaneously sympathetic with the victims of war and cynical about the purposes of war, implicitly criticizes the image of the romantic hero, showing in graphic scenes the realities of battlefield death and the emotional torment it causes for those left behind.

More summaries and resources for teaching or studying War Is Kind.

War Is Kind from Gale. ©2005-2006 Thomson Gale, a part of the Thomson Corporation. All rights reserved.