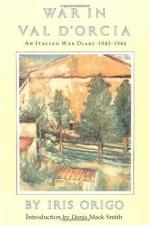 Iris Origo
This Study Guide consists of approximately 29 pages of chapter summaries, quotes, character analysis, themes, and more - everything you need to sharpen your knowledge of War in Val D'Orcia, 1943-1944.

The narrative of this book consists of a series of diary entries written at the height of World War II by an American-born woman, Iris Origo or the "Marchesa" married into an aristocratic Italian family. In the midst of events shaped by the social, political, and military contexts of the time, the Marchesa writes of the challenges faced by her family, her community, and her adopted country during the struggle to maintain some semblance of normal, day-to-day life in the face of increasing, debilitating war and violence.

The book's editor introduces the diaries with a brief summary of the social, political, and military circumstances that triggered the eruption of World War II. Next, the Marchesa prefaces the diaries with brief commentary, written after the conclusion of the war, of the belief in the human spirit that characterized her actions and those of others in the Val d'Orcia community during the fighting.

The diary excerpts themselves begin with events in January of 1943, when the war in Europe had already been underway for a number of years. The Marchesa writes of the arrival of a group of children taking refuge in the relative safety of the Val d'Orcia, a group that increases in number once the mothers of the initial refugees see how safe and well cared for their children are. She also writes, in considerable detail of events on the world stage of the political and machinations of Italian dictator Benito Mussolini, of Mussolini's relationship with German dictator Adolf Hitler, and of the determined attempts by the Allied forces to defeat their coalition. She also describes how, over the course of the year, what seems to be self-defeating apathy on the part of the ordinary Italian citizen evolves into a grim determination to ensure that those victimized by war are taken care of whenever and however possible. Her diaries reveal how she and her family become leaders in the Val d'Orcia community of these activities, the ongoing and intensifying effort to preserve humanism in the face of increasing, and increasingly desperate, military brutality and callousness. The diaries also reveal, somewhat surprisingly, that in the midst of all the suffering and her work to alleviate it, the Marchesa is expecting a child and, in May of 1943, gives birth.

As 1943 continues, Mussolini is overthrown and the Allied forces gain both influence and strength, driving the German and Italian armies back. As they retreat, however, the brutality and desperation for land, safety and supplies increases, with the result that the Marchesa's home, and the Val d'Orcia as a whole, become increasingly overwhelmed. This, the diaries make clear, puts the lives and well being of the farmers in the valley, as well as the refugees they keep safe, in increasing danger, danger they continue to ignore in the name of preserving human life and dignity. The Marchesa's description of, and commentary on, the events of 1943 comes to an end with commentary on the irony of celebrating Christmas, with its associated imagery of peace and love, in the midst of brutality and destruction.

1944 begins with increased tension in the Val d'Orcia, as the occupation by the retreating German armies continues and intensifies. Eventually, Allied attempts to bomb the Germans into complete surrender lead the Marchesa, her family, and the refugee children to evacuate to Montepulciano, a larger community yet to be overrun by retreating Germans. After a hazardous, tiring journey, the group arrives in safety, and are welcomed by the war-fatigued, but compassionate, citizens of the city. The retreating Germans pass through, but their stay is brief and the war in Italy comes to an end in July.

When the group returns to the Val d'Orcia, the Marchesa discovers that the construction of the house is still intact, but the house's interior, the farms in the valley, and the surrounding countryside have all been ransacked. While fully aware of the challenges faced by the community in rebuilding, the Marchesa writes of the determination she shares with her tenant farmers to rebuild life in the valley as it once was.

More summaries and resources for teaching or studying War in Val D'Orcia, 1943-1944.