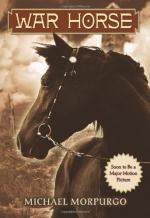 Michael Morpurgo
This Study Guide consists of approximately 34 pages of chapter summaries, quotes, character analysis, themes, and more - everything you need to sharpen your knowledge of War Horse.

War Horse is a young adult historical novel by Michael Morpurgo that recounts the experiences of Joey the horse in World War I. Joey is purchased as a colt by the Narracott family in rural Devon, England, a few years before the war breaks out. Thirteen-year-old Albert Narracott comes to care for Joey, raising him well, training him to do farm work, and teaching Joey to come when called by owl whistle. Joey finds a fast friend in Albert, and the two are inseparable. As Joey and Albert both grow, Joey learns from Albert that war has broken out over in Europe. The war hits farm prices hard, causing Albert’s father to sell Joey to a British cavalry officer, Captain Nicholls, so that the mortgage can be paid. Joey and Albert are both heartbroken by this.

Captain Nicholls promises Albert that he will take good care of Joey, and lives up to his promise. Not only does Joey train to become a war horse, but Joey befriends Nicholls, who takes seriously his promise to Albert. Joey also meets Captain Stewart, who rides a horse named Topthorn. Joey and Topthorn fast become friends, and are nervous shipping across the English Channel to serve in France. With the war raging all around them, Joey and his unit spend much of their time protecting the British flanks from German troops. During one engagement, Nicholls is killed. Joey then becomes the mount of Trooper Warren, who, like Nicholls, cares deeply for Joey. As the armies entrench, the British look for a way to break the stalemate, and decide a cavalry charge on German positions will be best. The cavalry unit is destroyed by German machine guns. Joey, Warren, Stewart, and Topthorn are captured by the Germans.

The Germans press Joey and Topthorn into medical service, where they help cart the wounded away from the frontlines to field hospitals. Each night, Joey and Topthorn are taken to a local farm where they are cared for by 13-year-old Emilie and her grandfather. Emilie, who has lost her entire family in the war apart from her grandfather, is delighted to have the horses around. Joey and Topthorn take a quick liking to Emilie, who treats them with sheer kindness. The horses are later given to Emilie in thanks for her help, but several months later are forced back into military service by a German artillery unit. Joey and Topthorn are forced to pull massive cannons into position during battles, which is hard work and is frightening. The horses have little food and rest, and often die of exhaustion and heart failure. Topthorn dies of heart failure, which devastates Joey. During a tank attack, Joey races away in fear, where he becomes trapped in no-man’s land and injures his leg on barbed wire.

Joey is freed by a British soldier and a German soldier, who flip a coin to see who will bring Joey back to their lines. It is the British soldier who wins, and leads Joey back to his British veterinarian unit. There, Joey is stunned to find that Albert is a soldier working with the vet. Albert proves that Joey is Joey when he gets Joey to respond to an owl whistle. Albert is thrilled to have found Joey, believing all along that he would one day find him. However, as the war ends, the British government decides to auction off most of the horses it has used. Emilie’s grandfather bids and wins Joey, but when he learns who Albert is and what Joey means to him, he sells Joey to Albert for a single penny and the promise that Albert will tell others about the good things Emilie did for the horses. Albert learns that Emilie has died of weakness from pneumonia, and heartache at having lost her horse. Albert agrees to the sale deal, and returns home with Joey. There, Joey watches as Albert gets married, and Joey befriends Albert’s children.

More summaries and resources for teaching or studying War Horse.