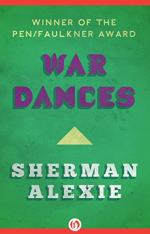 Related Topics
Because My Father Always Said He Was the Only Indian Who Saw Jimi Hendrix Play 'The Star-Spangled Banner' at Woodstock
Reservation Blues
Sherman Alexie
Ten Little Indians
The Absolutely True Diary of a Part-time Indian
The Lone Ranger and Tonto Fistfight in Heaven
What You Pawn I Will Redeem
You Don't Have to Say You Love Me
This Is What It Means to Say Phoenix, Arizona
Happy Trails
Clean, Cleaner, Cleanest

Sherman Alexie
This Study Guide consists of approximately 41 pages of chapter summaries, quotes, character analysis, themes, and more - everything you need to sharpen your knowledge of War Dances.

NOTE: Citations in this study guide refer to the 2009 Grove Press paperback edition of War Dances by Sherman Alexie.

War Dances is a collection of short stories and poems by Sherman Alexie, most of which focus on Native Americans in contemporary settings, and which deal with themes that include loneliness, unexpected surprises, the influence of history, and so on. In the poem “The Limited,” the narrator wonders why poets always think they can change the world when really all they can change is themselves. In “Breaking and Entering,” George Wilson, an American Indian, uses a baseball bat to kill a black teen that breaks into his house and tries to attack him. George’s action elicits a media firestorm, isolating him from the world. In “Bird-Watching at Night,” the lonely narrator recalls the past when his girlfriend broke up with him for thinking he was an owl.

In the titular story “War Dances,” the Native American narrator suffers from a sudden hearing loss which makes him worry that he has a brain tumor or that his childhood hydrocephalus has returned. Neither turns out to be the case, but during his experiences he recalls his own father’s time in the hospital, during which another Indian family gifted the narrator with a blanket for his father with an Indian song being sung over the blanket to fight off illness. However, the narrator knows that such songs cannot actually heal, but only comfort.

In “Catechism,” the Indian relationship with God is discussed, where the narrator’s mother is a devout believer in God and in bringing the old ways into line with Christianity, while his father is an atheist. In “The Senator’s Son,” the son of a conservative Republican U.S. Senator beats up a gay guy named Jeremy who used to be his best friend simply because Jeremy is gay. Jeremy, himself a conservative Republican, forgives the son, saying his father is the finest senator the state has ever had and that there are more important things in the world to worry about than being beaten up. In “The Ballad of Paul Nonetheless,” Paul twice sees a woman at different airports and attempts to come on to her, but she turns him down both times as she is happily married. Paul believes he and the woman have a connection because he has seen her twice, and Paul believes all people have connections through shared songs. When Paul comes on to a woman who resembles the previous woman and refuses to take her rejection, he is detained by security and begins singing to the guards.

In “On Airplanes,” the narrator comments about how he always gives up his seat so couples may sit near one another. In “Fearful Symmetry,” the screenwriting narrator quits a job when the studio demands too many changes to his script and then enters a crossword competition and loses. On the flight home, the narrator pretends to quickly fill in the crossword in the New York Times to impress a fellow passenger. The narrator realizes he is liar but that all fiction writers are liars, and he longs to return to a more innocent time in his life when he could really write. In the short story “Salt,” the narrator is a temporary obituary writer. He goes to collect obituary materials for a widow only to realize the widow has dementia, lives alone, and is lonely.

More summaries and resources for teaching or studying War Dances.