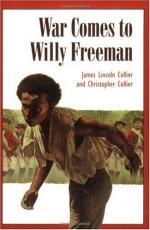 This detailed literature summary also contains Topics for Discussion and a Free Quiz on War Comes to Willy Freeman by James Collier.

Willy Freeman is thirteen on the day the she watches British soldiers pass by her house. She recalls the flash of sun on the metal of their bayonets and dreads the fact that her father will now be called on to fight. Willy's parents, Jordan and Lucy, are free. Her father was freed in order to allow him to fight for the Americans against the British and the slave owner freed both Lucy and Willy in order to be fair to Jordan. The family lives in a tiny cabin and her father often fishes in the nearby bay.

As the British are passing by, Lucy tells Willy to put on her "milking britches" and milk the cow. Willy almost objects because she knows that she'll have to put her dress back on later, but gives in without much of a fuss. She finishes milking the cow and returns to the house. A short time later, Jordan announces that he's headed to Fort Griswold to join the fighting. He tells Willy to go along in order to bring the family's horse back to the cabin. Lucy pleads with him to leave Willy at home but Jordan insists. When they get near the fort, they discover that the fighting is already intense. Jordan makes a run for the wall and is hauled over. As Willy turns to leave, she's suddenly caught up in the battle and forced toward the wall. She's pulled up to safety but the British soon force their way in and kill all the Americans inside, including Jordan. When they discover Willy is a girl, she's released.

At home she finds that her mother is missing, apparently taken captive by the British. Not knowing what else to do, she makes her way to the home of her Aunt Betsy. There, she discovers a slave owner named Captain Ivers, who is intent on returning Willy to slavery. Willy heads to New York, hoping to find her mother there. Through a series of adventures and some sheer luck, she is taken in by a tavern owner, Black Sam Fraunces, as she continues to search for Lucy. When the war draws to a close, Lucy is released and Willy learns that her mother is very sick. She's then faced with a difficult decision. If she goes to her mother's side, she'll have to face Captain Ivers again. She know she can't let her mother die without seeing her and arrives to find that Captain Ivers has refused to allow a doctor. Willy tries to get a doctor but is unable to. Her mother dies.

In her grief, Willy attacks Captain Ivers, and Jack has to step in to prevent Captain Ivers from whipping Willy. Jack winds up in jail and Willy almost runs away but realizes she has to return to face the situation. She goes to court and helps assure Jack's release. After resolving the issues at hand, Willy decides she will return to New York where she believes she can eventually make her dreams come true.