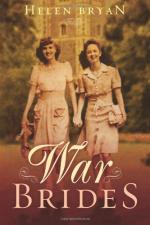 Helen Bryan
This Study Guide consists of approximately 38 pages of chapter summaries, quotes, character analysis, themes, and more - everything you need to sharpen your knowledge of War Brides.

Saint Gabriel's Church is the local parish of Crowmarsh Priors. It is overseen by Oliver Hammet. Old smugglers' tunnels are underneath the church's graveyard. Saint Gabriel's Church is a beautiful country place of worship, which becomes the gathering place for members of the town throughout the novel. The church is destroyed in a bombing raid during World War II, only to be rebuilt fifty years later, in time for the anniversary of VE Day.

Crowmarsh Priors is a beautiful English village located in the countryside of Sussex, near Sussex Downs. It is the home of the Fairfaxes and the Osbournes. The center of its social and religious life is that of Saint Gabriel's Church. During the war, Crowmarsh welcomes numerous children from London among its families and homes. Crowmarsh is ultimately bombed by the Germans, courtesy of Hugo de Balfort, and Saint Gabriel's is...

More summaries and resources for teaching or studying War Brides.