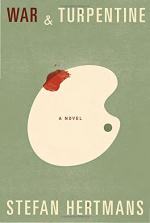 Stefan Hertmans
This Study Guide consists of approximately 47 pages of chapter summaries, quotes, character analysis, themes, and more - everything you need to sharpen your knowledge of War and Turpentine.

This detailed literature summary also contains Quotes and a Free Quiz on War and Turpentine by Stefan Hertmans.

The following version of the book was used to create this guide: Hertmans, Stefan. War and Turpentine. New York: Pantheon Books, 2016.

Going into the diaries, the narrator relates the childhood of his grandfather, born to Celine Andries, the educated daughter of a middle-class family, who married his father, Franciscus Martien, a painter of chapels, against the wishes of her family. They lived a difficult life, with Celine adjusting to her new surroundings easily for the sake of her husband and family. Urbain grew up witnessing his father and mother working hard, with his father painting in the chapels and inspiring his son while his mother worked prudently to help the family survive. Despite the deep bond within the family, financial circumstances and his father's failing health forced Urbain to begin working early, as an apprentice to a tailor, eventually making his way to work in an iron foundry. While his spirits slowly broke due to the back-breaking labor, his father was attacked by socialists, instilling a deep distrust for the movement and its followers. The death of a neighboring woman forced the family to adopt a few more children, one of whom was a lifelong inspiration to Urbain for his chance to become educated.

When Franciscus received the opportunity to paint a church in Liverpool, Urbain became the man of the house, serving as a financial and emotional support to his mother. A visit to a gelatin factory affected him deeply, instilling a sense of profound distress at the sight of the slaughtered animals. Continuing his work at the iron foundry, Urbain began to take art lessons, wanting to emulate his father. He was frustrated, unable to master basic techniques being taught to him. Eventually his father returned from Liverpool, sicker than before. While his mother cared for him vigorously, his asthma worsened and he eventually passed away. While his mother entered a long period of shock, Urbain took responsibility for the house. Henri de Pauw, an alcoholic neighbor, proposed marriage to Celine, arguing that she needed the financial support, to which she reluctantly agreed. Urbain was incensed and had an uneasy relationship with his stepfather despite the amiable connection he had with his step-siblings.

After training for four years at a military school and leaving, Urbain was conscripted for service in August of 1914, the beginning of World War I. Along with other Flemish soldiers from Ghent, he was sent out into the Belgian countryside to confront the oncoming Germans. While moving from place to place with low rations and poor morale, the Flemish soldiers were subject to discrimination by the French officers. Finding temporary reprieve in the small village of Schiplaken, the group of soldiers were attacked by heavy artillery and German snipers, losing a large number of soldiers before moving on to Yser in October, where after a long period of frustrating stalemate, Urbain was injured and sent to Liverpool to recuperate. While there, he momentarily discovered the church his father was assigned to paint, recognizing his own face in the mural. Urbain returned to the front lines, only to seriously injure his leg again. He was visited by the Queen as he recuperated and decided to take a trip to see Raymond, his stepbrother, in Swansea. The ferry was taken in by a storm which he barely survived, only to be further depressed by the bleak weather of Swansea. Returning to the front lines, he again faced the death of his comrades during long stretches of stasis, eventually leading up to the end of the war.

Despite the jubilant spirit of the country, Urbain returned home broken, though his spirits were lifted when he met Maria Emelia Ghys, the daughter of a neighboring merchant. They fell in love but Maria's life was taken by the Spanish flu, after which Urbain married her sister Gabrielle. Their relationship was a tense one, as she reminded him of her sister physically, and she perceived this and was distant as a result. The narrator combs through paintings of Urbain, trying to find a trace of Maria and realizing that her reflection is present in Urbain's rendition of the Rokeby Venus. Despite the tension of their marriage, Gabrielle and Urbain were emotionally attached, at least over the loss of Maria from their lives. In the last decades of his life, Urbain focused on painting, and the narrator recognizes the dedication to the craft that was emphasized over emotional effect. After a visit to Yser, the narrator looks at his grandfather's self-portraits and the emotional distance there is in them. Having completed the reading and transcription of the notebooks, the narrator reflects on the life of his grandfather as a dutiful soldier who also desired intensely to be an artist, and how he balanced the two while remaining strictly religious. He imagines him once again as a soldier at the gates of heaven, requesting permission to enter the world he has been waiting to do so for so long.

More summaries and resources for teaching or studying War and Turpentine.