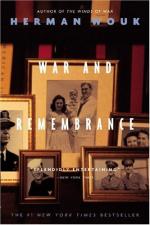 This detailed literature summary also contains Related Titles and a Free Quiz on War and Remembrance by Herman Wouk.

Victor "Pug" Henry prepares to take over command of the U.S.S. Northampton. He reads over a letter from his wife, Rhoda. They have apparently had marital problems but Rhoda now says she wants to make things right. She also asks Pug to see if he can find out anything about Natalie, their daughter-in-law, who has not been heard from in several days. Natalie is Jewish and Rhoda is concerned for her and her baby son, Louis. Pug shares lunch one last time with his other son, Warren, his wife Janice and their baby, Little Victor, at their home near Pearl Harbor before he returns to his ship.

The story is the sweeping saga of the Henry family set against the backdrop of World War II. The book is historically accurate with only a few literary exceptions.

Pug and Rhoda have been separated by war for some time. During that time, Rhoda has begun seeing another man. That is why she asks for a divorce but later feels guilty and recalls the request. She will decide she should become a good wife to Pug and end the affair only to find herself attracted to another man whom she eventually marries. Pug meanwhile has become interested in an Englishwoman, Pamela Tudsbury, who is following around her father, Alastair "Talky" Tudsbury, a famous journalist. She and Pug never quite manage to spend much time together and even during that time they are restrained, though they admit they have fallen in love. When Rhoda finally does say she definitely wants the divorce, Pug proposes to Pam who has since become engaged and turns him down. She changes her mind, accepts his proposal and they finally marry, settling in Washington.

Meanwhile, Pug is captain of a ship, the Northampton. He sails out of Honolulu where his son, Warren, lives with his wife, Janice, and their son, Vic. Warren is a pilot and he and Pug go into battle together at Midway against the Japanese. It is there that Warren's plane goes down while Pug has not fired even a single shot. The death of Warren is what briefly prompts Pug and Rhoda to get back together, but it does not last.

Pug's younger son, Byron, is manning a submarine. He serves under his friend, Lady Aster, for some time until Aster is killed in combat. Byron takes over command and is given his own command shortly after. He is spending time in Honolulu with Janice, his brother's widow, and admits that they have fallen in love but nothing can come of it because he is still hopeful that his wife, a Jew being held in Germany, is alive with their son. His wife, Natalie, is actually being held with her uncle, Aaron Jastrow. It is Aaron who kept Natalie in Europe as the war started because Aaron simply did not believe the situation was as bad as it turned out to be. Natalie and Aaron, carrying Louis along, are shuffled from one spot to another as they try to escape back to America. By the time they learn the truth, it is too late and they are being held in a prison camp. Aaron's cousin, Berel, has escaped Auschwitz and it is Berel who manages to get Louis out of the camp by having a doctor fake his death certificate and placing him with a family in Prague. Aaron is soon killed in the gas chambers but Natalie is among the last moved into Auschwitz and survives, though barely. Byron spends days traveling the countryside before he finds Louis, traumatized but alive.

Pug's daughter, Madeline, goes through a series of ups and downs, mainly on account of her boss, Hugh Cleveland. Hugh is married and continues to tell Madeline that he will divorce his wife but never does. She finally cuts her ties with him and marries a naval officer who is a scientist working on the production of the super weapon—the bomb dropped on Hiroshima.

Through it all, Pug remains a frequent visitor to the White House and is taken into the confidence of President Roosevelt. He gives up sea commands at the President's request and is appointed Naval Aide under Eisenhower's presidency.