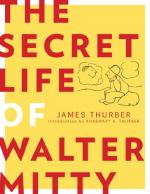 James Thurber's 1933 My Life and Hard Times is a semi-fictional autobiography full of comically exaggerated incidents from his life.

T. S. Eliot's 1917 modernist poem, The Love Song of J. Alfred Prufrock, explores the emptiness of modern life through its depiction of Alfred Prufrock, who struggles with the nature of his existence. Critic Peter DeVries referred to James Thurber as a "comic Prufrock," noting Thurber's ability to capture human weaknesses, and to balance tragedy and comedy in his work, all elements found in the Prufrock poem.

Mark Twain's 1885 novel, The Adventures of Huckleberry Finn, is a classic of American humor. The novel about a young boy who chooses to escape his home rather than be "civilized" is Twain's most popular work.

John Updike's Rabbit, Run, published in 1960, is the story of blue-collar Harry "Rabbit" Ang strom, who runs away from adult...