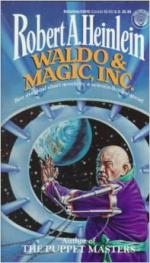 This detailed literature summary also contains Bibliography on Waldo by Robert A. Heinlein.

While Heinlein utilizes his favorite themes in this piece (self-reliance and independence), his warning about hidden dangers in new technology seems somewhat unusual. Heinlein, and the other authors of the "Golden Age" of science fiction (notably Arthur C. Clarke and Isaac Asimov), generally glorify technology as a kind of savior of the human race. However, in several of the main characters, Heinlein reiterates his insistence on the independence of the individual. Waldo tries to live his own life without any reliance on others; Dr. Grimes and Gramps Schneider live in their own ways and are not concerned with how other people see them. The ultimate concentration of the story, then, continues Heinlein's theme of self-reliance.

The mechanical "hands" or series of mechanical joints used today in engineering and mechanical puppetry are now called "waldoes" after this Heinlein story, demonstrating the significant impact that Heinlein's works have enjoyed over the years.