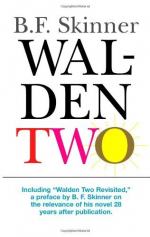 This detailed literature summary also contains Topics for Discussion and a Free Quiz on Walden Two by B. F. Skinner.

In Walden Two, B.F. Skinner makes a case for behaviorism and "social engineering" as the solution to many of the world's problems. Frazier, a psychologist interested in the practical applications of psychology to real-world problems, creates a communal social experiment called Walden Two. In the book, he leads his former colleague Professor Burris and Burris's friends through Walden Two, explaining how Frazier's theories have created a utopian society.

A former student of burnt-out college psychology instructor Professor Burris comes to visit after a tour in the Pacific during World War II. Dissatisfied with life in the U.S. after the war, the student and his army buddy want to know about a different kind of life, something Burris mentioned in one of his lectures. The ideas go back to Burris's former colleague named Frazier, and Burris tracks Frazier down to where he's putting his utopian ideas into practice: Walden Two, a communal society in the country in New England.

Burris, his former students, their girlfriends, and a philosophy professor at Burris's university go to visit Walden Two, which has been running for ten years. Frazier guides the group through the miniature society. Walden Two is run by a Board of Planners, who serve for ten years. By consensus, the Board of Planners chooses successors for retiring board members. The Planners oversee Managers, specialists who run departments such as education, food, and labor after working up to their positions.

All children are raised communally. Babies live in a nursery, sleeping in climate-controlled cubicles. Parents spend time with their children, but they also spend time with other children. Older children continue to live communally, and are educated in ethics through behavioral training. Education focuses on teaching thinking skills, and children are free to pursue studies that interest them.

Meals are served throughout the day, and cooks work to make the food produced by Walden Two appetizing. People pay their way with labor-credits, working an average of four hours a day. Walden Two has a dairy and farms and is able to take advantage of crops that outside farmers might be unable to harvest because of its surplus of available labor. Everyone in Walden Two has plenty of rest and free time, and the arts flourish. People marry early, and economic stresses are taken out of life. Walden Two is not a democracy, and no one votes. Running the commune is left to experts, who use experimentation to find the best forms of governing.

The professor of philosophy is appalled at the idea of Walden Two and happy to leave it behind. The two former soldiers both want to stay, but one of them is engaged to a wealthy, haughty woman who can't stand the commune, and he leaves with her. The other couple, who are lower-class, are glad to have a way out of an impossible economic situation. Professor Burris sees the success at Walden Two, but he plans to leave, not believing that he can leave his old life behind. At the last minute, he changes his mind and walks back to Walden Two and a new life.