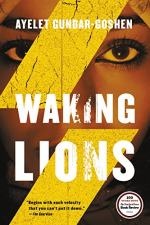 Ayelet Gundar-Goshen
This Study Guide consists of approximately 47 pages of chapter summaries, quotes, character analysis, themes, and more - everything you need to sharpen your knowledge of Waking Lions.

The following version of this book was used to create the guide: Gundar-Goshen, Ayelet. Waking Lions. Back Bay Books, 2018.

When Dr. Eitan Green exposes his boss, Professor Zakai, for accepting bribes for emergency medical operations from patients, the Raanana hospital director transfers Eitan to Soroka hospital in Beersheba, Israel. Dissatisfied with his new life, Eitan takes a late-night drive in the SUV he hates after completing a shift at Soroka. As he races through the desert while blaring Janice Joplin on the car radio, Eitan’s SUV collides with an Eritrean refugee who emerges on the side of the road. Eitan leaves the SUV to assess his victim and immediately recognizes that the Eritrean will die, regardless of whether Eitan makes any effort to save him. Knowing that he will lose his medical license and serve time in jail if he confesses to the accident, Eitan abandons the Eritrean and returns home to his family.

The next morning, an Eritrean woman named Sirkit visits Eitan’s house after his family leaves for the day. She returns Eitan’s wallet, which he dropped while examining the Eritrean man he hit with his SUV and demands that Eitan speak with her. Determined to conceal the hit-and-run from his family, Eitan requests that they discuss the accident in a secluded location. Sirkit selects a deserted garage in Tlalim where they can meet covertly later that night. When Eitan arrives at the garage, he learns that Sirkit has transformed the space into a makeshift hospital. Sirkit reveals that the man Eitan killed was her husband, Asum, and requests that Eitan return every night to provide medical care for illegal refugees living in the area.

Meanwhile, Eitan’s wife, Liat, an investigator with the local police, attempts to solve Asum’s hit-and-run case. When a young man named Ali gets caught stealing a Mercedes SUV, Cheetah, one of Liat’s colleagues, coerces him into confessing to murdering Asum. Convinced of Ali’s innocence, Liat continues searching for the culprit of the hit-and-run and discovers that Ali’s girlfriend, Mona, was with him during the Mercedes SUV theft. Three days later, Mona arrives at Sirkit’s illegal hospital, stabbed repeatedly by her brothers for engaging in impure relations with Ali. Despite Eitan’s efforts to save her, Mona dies.

The next morning, Liat receives a call from the police department informing her of Mona’s death. When Liat phones Soroka after examining Mona’s body at the morgue, she learns that Eitan lied about his reasons for leaving the hospital early that day. Angry and suspicious, Liat refuses to speak with Eitan for several days and even visits Soroka to confirm that Eitan attends his night shift. When she sees Eitan through the hospital window, Liat vows to never again check up on him.

Shaken by Liat’s discovery, Eitan avoids Sirkit for three weeks to regain his wife’s trust. Just as he begins repairing his broken family life, Sirkit returns to Eitan’s neighborhood and insists that he take her to the garage immediately. Eitan arrives at the illegal hospital to find Sirkit’s friend Semar in labor. After successfully delivering the baby, Eitan agrees to monitor Semar and her child overnight. The next morning, Eitan wakes to Semar’s screams and discovers that her baby’s skin is blue. Though Eitan know he will lose his medical license, he races to the nearest hospital with Semar’s baby in his SUV’s car-seat. But the infant dies before he arrives. When Eitan phones Sirkit to inform her of the baby’s death, she requests that Eitan return to the garage and care for Semar. During his visit, Davidson, Semar’s rapist and the father of her dead child, discovers the garage and begins beating Semar. When Davidson refuses to release Semar despite Sirkit’s orders to let her go, Sirkit stabs him. Sirkit vows to release Eitan of his duties at the illegal hospital in exchange for his silence about her murder of Davidson.

Eitan returns home to celebrate his freedom with his family, only to find the house empty. When he calls Liat to learn of their whereabouts, she explains that the nurse at Soroka informed her that Eitan had called in sick. Knowing otherwise, Liat took their sons, Itamar and Yaheli, to her mother’s house. Desperate to amend Liat’s broken trust, Eitan drives to meet his family. Just as an opportunity to speak privately with Liat finally presents itself, Eitan receives a call from Semar informing him that Sirkit desperately needs a doctor.

Knowing that leaving may destroy his relationship with Liat, Eitan returns to the garage. He finds Sirkit with a black eye and a broken nose, teeth, and ribs. When Eitan asks who beat her, Sirkit reveals that the men who attacked her came in search of a lost drug shipment that Asum was meant to deliver the night of his death. Outraged that Sirkit kept the drugs, Eitan leaves the garage. During his drive home, Eitan notices a vehicle speeding towards the illegal hospital. Without thinking, Eitan turns his SUV around to rescue Sirkit. He arrives at Sirkit’s side moments before her attackers surround the garage. Using an oxygen tank to ignite the flame from a cigarette, Eitan and Sirkit escape the garage to his SUV. But before they can drive away, one of the attackers begins shooting at the SUV’s windshield, and Eitan must run him over to save their lives. Just then, a police ambush arrives and arrests Eitan and Sirkit.

After keeping Eitan in a holding cell all night, the police commander, Marciano, finally interrogates Eitan in his office. Marciano reveals that Sirkit confirmed Eitan’s innocence in her drug trafficking when she explained that Eitan was only present during the confrontation because he volunteers medical treatment for refugees living in Tlalim. Though Marciano permits Eitan to return home, Liat remains unconvinced of his innocence and asks to interrogate Sirkit herself. During Liat’s conversation with her, Sirkit explains that Eitan happened across the suffering refugees while driving his SUV one night and has continued treating them ever since. Though she struggles to believe that Eitan could act so altruistically, Liat convinces herself that Sirkit tells the truth.

Several weeks later, Eitan visits Sirkit in the women’s refugee detention camp. He attempts to thank her and say good-bye but cannot speak. The two part and Eitan returns to his regular life.

More summaries and resources for teaching or studying Waking Lions.