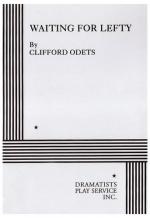 Introduction & Overview of Waiting for Lefty

This detailed literature summary also contains Bibliography and a Free Quiz on Waiting for Lefty by Clifford Odets.

Clifford Odets's Waiting for Lefty is a vigorous, confrontational work, based on a 1934 stake of unionized New York cabdrivers. Explicit political messages dominate the play, whose ultimate goal was nothing less than the promotion of a communist revolution in America. Appearing at the height of the Great Depression, the play's original 1935 production was a critical and popular sensation. Waiting for Lefty was widely staged throughout the country and brought Odets sudden fame. While its dramatic style has long since fallen out of fashion (along with the idealistic politics that inspired it), it is considered a prime example of a genre known as "revolutionary" or "agitprop" theatre. (The latter term is a combination of "agitation" and "propaganda.") The idealistic practitioners of agitprop sought to harness the power of drama to a specific political cause and create a "people's theatre" for the new world that would follow the revolution.

A one-act play in eight episodes, Waiting for Lefty is composed of two basic stagings. The main setting is a union hall, where the members wait to take a hotly-contested strike vote. While the corrupt union leader Harry Fatt arrogantly toes to discourage the members from walking out, support for a strike is high, and the workers nervously await the arrival of the leader of the strike faction, Lefty Costello. As they wait, members of the strike committee address the workers, each telling the story of how he came to be involved in the union and convinced of the necessity for a strike. These individual stories are sketched in a series of vignettes, played out in a small spotlit area of the stage. Each is a story of unjust victimization, mirroring Fatt's heavy-handed attempts to control the union meeting. The building tension and emotion reaches a climax when the news arrives that Lefty has been murdered, and the meeting erupts in a unanimous demand to "Strike! Strike'"

Modern audiences may find Waiting for Lefty's style and dogmatic politics strange and unfamiliar; it is rarely produced and is often characterized as an historical curiosity. More than most dramas, it is the product of a particular time and place—-for its overriding concern was to influence that time and place, not to create "immortal art," and certainly not to create diverting, light-hearted entertainment. It faced its grim times squarely and offered its audience a stirring vision of hope. In this sense Waiting for Lefty is seen as an important dramatic work that offers historical evidence of the social power and aspirations of theatre.