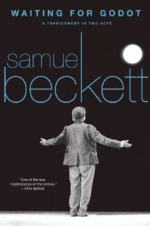 Books Like Waiting for Godot by Samuel Beckett | Suggested Reading

Beckett's Endgame (1957) features a more antagonistic pair of men in an even drearier situation, while Beckett's Happy Days (1961) demonstrates his focus on women and Come and Go (1966) represents how "minimalistic" Beckett would eventually become in his drama.

Joseph Heller's Catch22 (1961) is afamous dark comedy in novel form that deals with the absurdity of the military in World War II.

Tom Stoppard's Rosencrantz and Guildenstern Are Dead (1966) is often seen as a play that consciously imitates Beckett's Waiting for Godot.

Eugene lonesco's The Bald Soprano (1950), The Lesson (1951), and The Chairs (1952) all epitomize the Theatre of the Absurd and provide interesting similarities and contrasts with Beckett's Waiting for Godot,

Jean-Paul Sartre's No Exit (1944) shows how Existentialist ideas can be presented in a more traditional dramatic form.

Albert Camus's The Myth of Sisyphus (1942; English translation 1955) was an enormously influential philosophical essay that posed...