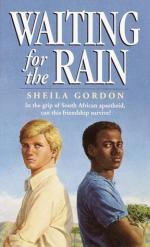 Sheila Gordon
This Study Guide consists of approximately 24 pages of chapter summaries, quotes, character analysis, themes, and more - everything you need to sharpen your knowledge of Waiting for the Rain.

Waiting for the Rain Summary & Study Guide includes comprehensive information and analysis to help you understand the book. This study guide contains the following sections:

This detailed literature summary also contains Topics for Discussion and a Free Quiz on Waiting for the Rain by Sheila Gordon.

Waiting for the Rain is a novel of South Africa by writer Sheila Gordon. In this novel, the main character is Tengo, a young black boy who grows up on a farm owned by a white family. Tengo is friends with the young nephew of the farmer, but as the two boys grow older Tengo becomes aware of differences in the way he and the nephew are treated. Tengo begins to read and to become educated, causing these differences to become more and more evident. Finally, Tengo finds himself embroiled in the student revolution taking place against the white government and face to face with his old friend. Waiting for the Rain is a story of the terrible toll the struggles in South Africa had on its youngest victims, the children.

Frikkie prefers the adventures in the country he finds on his uncle's farm to the rigors of school in the city. Each time he comes to the farm on his school vacations, he first checks on each of his favorite animals before searching for his good friend, Tengo. Frikkie and Tengo, the son of his uncle's boss-boy, have been playmates since they were only three years old. Tengo is as much a part of the farm as Frikkie's favorite milking cow.

Tengo is a willing playmate to Frikkie despite the differences between them. Tengo is not allowed to dine with Frikkie in the main house even though his own mother prepared the food. Tengo is more knowledgeable about the farm than Frikkie as he is the one to teach Frikkie how to milk the cows. Frikkie returns this favor by teaching Tengo how to swim.

As Tengo grows older, he aches to learn. Tengo's mother is afraid to send him away to school because her older child died shortly after leaving the farm to attend classes. However, Tengo's mother manages to convince a sister to ask her employer for some old schoolbooks. Tengo devours these books and they begin to open his eyes to some of the inequalities taking place right before his eyes. In fact, Tengo discovers that his old friend Frikkie and his uncle misunderstand the history of their own country, allowing them to continue discriminating against Tengo and members of his race.

Tengo finally convinces his parents to allow him to go to Johannesburg to attend school. Tengo is so far behind in his studies that he studies constantly in an attempt to catch up. Tengo hopes to earn a first class matriculation and win a scholarship to college. However, in the year before Tengo is to write his matriculation, unrest breaks out in the city. Students begin staging protests against the government. The schools are soon shut down and Tengo finds himself forced to choose between loyalty to his friends and his desire to learn.

Tengo misses his matriculation exam but learns that a beloved cousin works with the African National Congress. Through the ANC, this cousin can arrange for Tengo to go overseas to continue his education. Tengo is frightened and excited all at once by this opportunity. However, shortly before he is due to leave, there is a gathering after the funeral of several children killed during a protest. Tengo arrives to find soldiers attempting to break up the meeting. Tengo finds himself filled with so much anger that he begins throwing stones at soldiers firing guns at the unarmed civilians.

One of the soldiers is killed by an unseen gunman. Tengo flees, but finds himself pursued by a soldier. Tengo hides in a shed only to be chased there by the soldier. Tengo hits the soldier on the head with a broken tire iron. After taking the soldier's gun, Tengo comes to realize this soldier is his old friend Frikkie. Tengo and Frikkie talk, sharing memories, but also debating the protests going on outside. Finally Tengo makes the decision to let Frikkie go. On his part, Frikkie makes the conscious choice not to turn Tengo in to his fellow soldiers.

More summaries and resources for teaching or studying Waiting for the Rain.

Waiting for the Rain from BookRags. (c)2022 BookRags, Inc. All rights reserved.