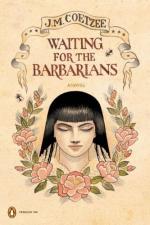 Waiting for the Barbarians Setting & Symbolism

The Empire represent power that doesn't require that those who serve it love others but merely perform duties.

According to rumors barbarian tribes have been arming and the Empire would have to employ measures to prevent war.

The square can be seen from the Magistrate's window. He can see prisoners arriving from there.

The Third Bureau is described as an unsleeping guardian of the Empire, being an investigative agency.

Colonel Joll stays at the inn, as it is the most comfortable place in town. When he sleeps there the staff has to tiptoe.

Birds that fly from the south circle around the lake near the marshes.

The expedition stumbles on the bed of an ancient terminal lagoon.

The abundance of poplarwood appears near the fire camp.

The Magistrate with soldiers reach the foothills...