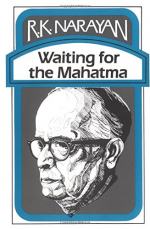 Related Topics
An Astrologer's Day
A Horse and Two Goats
Gods, Demons, and Others
Malgudi Days
Swami and Friends

R. K. Narayan
This Study Guide consists of approximately 43 pages of chapter summaries, quotes, character analysis, themes, and more - everything you need to sharpen your knowledge of Waiting For Mahatma.

Waiting For Mahatma: A Novel Summary & Study Guide includes comprehensive information and analysis to help you understand the book. This study guide contains the following sections:

This detailed literature summary also contains Quotes and a Free Quiz on Waiting For Mahatma: A Novel by R. K. Narayan.

Waiting for the Mahatma, widely considered R.K. Narayan’s most political work, still retains some elements of the famed Indian author’s characteristic comic realist style. The novel was originally published in 1955. The novel is divided into five parts and tells the story of Sriram, a young man in the fictional Indian town of Malgudi. Sriram becomes first a follower of Gandhi. Sriram then becomes a private soldier in the fight for India’s independence between the late 1930s and the day that Mohandas Gandhi was assassinated in 1948.

Part One begins with Sriram on the day of Sriram's twentieth birthday. Sriram is still living with his grandmother, whom he calls Granny. His grandmother takes him to get his inheritance, accumulated from years of military checks sent to the family in recompense for Sriram’s father’s death as a soldier in the British Army. The novel then shifts forward four years. Sriram hears that Gandhi has come to visit Malgudi and goes to hear him speak. There, he meets an attractive young woman named Bharati. Bharati is a follower of Gandhi. He goes with her to meet Gandhi, who tells Sriram that he must drive out all the hate from his heart before he can think of driving out the British.

In Part Two, Sriram has become an official member of Gandhi’s group. They embark on a tour of villages, the sight of which shocks Sriram. In 1942, Gandhi is thrown in jail for giving a speech calling on Britain to, as the famous remark goes, “Quit India.” From Gandhi, Sriram and Bharati receive instructions that they are to paint the words, “Quit India,” on every possible surface across all the villages around Malgudi. Part Two ends with Bharati deciding to join Gandhi in jail and Sriram refusing to do so.

In Part Three, Sriram falls in with Jagadish, a photographer determined to engage in anti-colonial, anti-British subterfuge. Although Sriram worries what Gandhi would think of their schemes, some of which end in the accidental deaths of others, Sriram goes along with the plan in hopes of seeing Bharati again. At the end of the novel, he goes to see his grandmother and is arrested there.

Part Four takes place in the prison where Sriram, who has not been classified as a political prisoner, is being kept. He dislikes prison life, which he finds oppressive and humiliating. The other inmates tease him for his reverence for Gandhi, who they claim does not accurately represent their interests. At the end of Part Four, news spreads that India is independent and that Gandhi is independent India’s Emperor. Sriram is released.

In Part Five, Sriram goes to find Bharati. They meet up in New Delhi. The violence between Hindus and Muslims, which eventually comes to be known as Partition, is of great concern to Gandhi and his followers. Gandhi eventually consents to their marriage. The night before they plan to be wed, Gandhi is shot and killed.

More summaries and resources for teaching or studying Waiting For Mahatma: A Novel.

Waiting For Mahatma: A Novel from BookRags. (c)2022 BookRags, Inc. All rights reserved.