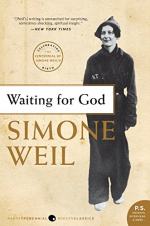 This Study Guide consists of approximately 42 pages of chapter summaries, quotes, character analysis, themes, and more - everything you need to sharpen your knowledge of Waiting For God.

This detailed literature summary also contains Topics for Discussion on Waiting For God by .

In her first two letters addressed to Father Perrin, “Hesitations Concerning Baptism” and “Same Subject,” Weil expresses her reticence to fully enter into formal relations with the Catholic Church and partake in the sacraments. She believes that her hesitation is indicative of a larger theological problem: how to discern and conform herself to the will of God. Weil fears that she is not in alignment with God’s will and worries that her own finite imperfections render her unworthy of sacramental participation. These fears and worries can only be overcome with the aid of divine grace. She also expresses some concern that the Church as a social structure might exert too much of negative influence on her in the form of dubious collective emotions. She seeks direct contact with God as an individual and the worry is that any form of mediation (the Catholic Church, for example) might diminish or weaken the possibility of such contact.

As the correspondence develops in “About Her Depature,” Weil confesses that her greatest personal desire is to abandon, if not completely lose, all individual will. She seeks shelter in the scene of Christ’s crucifixion and hopes to one day share in this suffering and abandonment in an effort to establish direct contact with God. As a means of perhaps hastening this experience and establishing some context, Weil outlines her spiritual biography, which is contained in the longest letter of the collection, “Spiritual Autobiography.” Here, Weil recounts her tortured adolescence. She felt inferior to her naturally-gifted brother and this led to sustained experiences of deep despair, the physical symptoms of which were very intense, almost paralyzing, headaches and migraines. For ten long years between the ages of 14 and 24 Weil practiced honing her faculties in order to think, read, and work. This led her to the importance of attention, a concept that is central to her theology. During these years, Weil read and fell in love with St. Francis of Assisi as well as Marcus Aurelius and other Stoic writers. She became fascinated with the idea of Fate and preoccupied with the Stoic motto of amor fati (the love of Fate).

At the age of 16, Weil experienced a period of serious emotional unrest. One day while contemplating the majesty of a beautiful mountain landscape, the idea of purity imposed itself upon her. She began to seriously consider what it might mean to lead a Christian life and while she was resistant to official dogma, she identifies three salient encounters with Catholicism that made a lasting impression on her: a year spent working in a factory in Portugal where she observed and was subject to serious physical and mental affliction; a two-day mystical experience at the Santa Maria degli Angeli chapel in Italy in 1937; and a ten-day trip to Solesmes, France during Holy Week in 1938. Following these experiences Weil began an intensive study of philosophical and mystical texts, including Plato, Homer, and Pascal. This culminated in 1940 with her study of the Bhagavad-Gita, a text in which she felt a deep resonance with Christianity. Weil also outlines her sustained study of the Greek language, an undertaking that would help her read not only philosophical texts, but also and especially the New Testament, in their native tongues.

In the final two letters, “Her Intellectual Vocation” and “Last Thoughts,” Weil discusses her intellectual vocation and further ruminates on the themes of affliction, direct contact with God, and friendship. It is here that Weil appears to finally be at peace with her reticence to participate in the sacraments and fully enter into a formal relationship with the Catholic Church. She justifies this by appealing to her intellectual vocation. This vocation, imposed on her from above, necessitates that she remain outside the church in order to retain intellectual honesty so that she can remain indifferent to all ideas, including those found in official Christian dogma. Finally, Weil expresses some gratitude. She believes that she has finally experienced direct contact with God through affliction and mercy. She finds examples similar to this in Homer, St. Paul, St. John of the Cross, and the Stoics. This experience has enabled her to love anything and everything more fully, a practice that she equates with universal duty and saintliness.

The essays contained in Part Two of the work are, in large part, a rich and sustained theological reflection on the ideas and themes broadly sketched out in the letter to Father Perrin, i.e., attention, affliction, forms of love, friendship, and contact with God. The first essay, “Reflections on the Right Use of School Studies with a View to the Love of God,” is Weil’s attempt to interpret practices of study and reflection in Christianity as a means of honing, refining, and focusing one’s individual attention. She believes that attention emerges from faith and is animated by desire. Moreover, no effort of attention is ever wasted. Each individual act of attention has an effect on the soul. The aim, as Weil sees it, is to increase one’s power of attention and to stretch the faculty of attention, as if it were a muscle. This requires a certain slowness. One must deliberately examine and contemplate each task on its own, concentrating and focusing one’s attention one a single object. This allows one to suspend outside thought and allow the object itself to take hold of one’s mind. Attention, then, is also waiting, i.e., waiting to be seized by an object that facilitates inner transformation.

The next two essays, “The Love of God and Affliction” and “Forms of the Implicit Love of God,” each respectively discuss the necessary conditions for divine and love and the character such love may take. Weil argues that affliction, which marks and takes possession of the soul, lays the necessary ground work for love and direct contact with God. Though affliction may emerge from physical ailments, it attacks and uproots all dimension of life: mental, social, emotional, etc. Weil cites the book of Job in the Hebrew Bible as a poignant example of affliction. During such experiences God is experienced as absence. This absence accentuates the infinite distance between God and humanity, for Weil. However, because of Christ’s crucifixion this distance is also transposed within God. God experiences God’s own absence through affliction. Weil believes that this is evidence of love and that by waiting on and for God through affliction one is better able to give and receive love.

This love often takes indirect or implicit forms in which God is not the sole or primary object. For Weil, this occurs in four main areas: love for one’s neighbor, love for the beauty and order of the world, love for religious practices, and friendship. There is no distinction between love for the neighbor and justice and the modern distinction between justice and charity is taken to be a false division. Likewise, generosity and compassion are taken to be inseparable. Through efforts of contemplation and attention, these virtues—justice, generosity, compassion—are all channeled toward love of the neighbor and the afflicted. It is in and through such efforts that Weil locates the presence of God. This form of love is complemented by love for the beauty of the world. Love for the world includes both an affirmation of chance and necessity (random occurrences and natural laws) as well as the autonomy of individuals and thought. Affirming and appreciating beauty in the world functions as a ladder of sorts, affording one the opportunity for further, higher contemplation of primordial divine love and beauty. The incarnation of God in Christ is cited as the chief example of this. Grasping such beauty here below is a corresponding image of eternity.

For Weil, any form of love is unreal unless it is directed to a specific and particular object. Religious practices provide such objects by analogy and transference. Thus, the love of religious practices provides opportunities for things like recitation, an act of focused attention, that offers an object through which love can be channeled. These practices, and others like the sacraments, provide some means of implicit and indirect contact with God. Friendship is an extension of the love of neighbor and for Weil it is perhaps the purest form of love and is thereby and imitation and reflection of divine love. Friendship constitutes a bond of affection, a union of opposite that is borne of reciprocity, equivalence, and sharing. The Trinity of Father, Son, and Spirit, is taken to be a blueprint for how friendship might function as a means of implicit love for God.

The final essay in the collection, “Concerning the Our Father,” is Weil’s line-by-line commentary on the Lord’s prayer and it functions as a short recapitulation of many of the themes discussed in the letters and previous essays. God is above and humanity below. The gap that subsists between the two is infinite and beyond reach. The only means of access to divine transcendence comes in the form of mediation, the Incarnation. God’s kingdom will come, but it is not yet here. By desiring the will of God, one can hasten the arrival of this kingdom. God provides sustenance and presence and has given humanity the example of forgiveness that is to be imitated. Remittance of debt, however, also includes a renunciation of ego and personal will, for Weil. Resistance of the temptation to do otherwise is attained through focused and sustained attention.

More summaries and resources for teaching or studying Waiting For God.