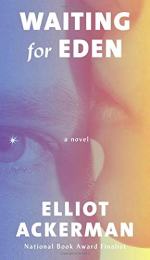 Related Topics
Green on Blue
Dark at the Crossing

Elliot Ackerman
This Study Guide consists of approximately 41 pages of chapter summaries, quotes, character analysis, themes, and more - everything you need to sharpen your knowledge of Waiting For Eden.

This detailed literature summary also contains Quotes and a Free Quiz on Waiting For Eden by Elliot Ackerman.

The following version of this book was used to create the guide: Ackerman, Elliot. Waiting for Eden. Knopf, 2018.

Ackerman’s novel opens with a wounded soldier, Eden, being flown from Iraq to a burn center in San Antonio, Texas. His wounds are extensive, and he is not expected to live. The nurses work through the multi-hour flight just to keep Eden alive. Readers observe Eden’s tumultuous route home through the narrator, Eden’s friend, who perished in the Humvee explosion that badly wounded Eden.

In the afterlife, the narrator, unnamed in this novel, tells the story of how Eden, his wife Mary and his lives interconnected in the preceding years before the second deployment to Iraq. He also recounts the awakening of Eden in the hospital three years after he was brought in.

In the three years Eden was unconscious, Mary was by his side, visiting daily and approving any procedures that needed to be done for Eden. Eden’s wounds are extensive: he has lost his limbs, a large percentage of his brain function is gone, and nearly his entire body is burned. Three years after the explosion, he is still at risk of infection and his skin detaches on the bed sheets. While Mary stood by his side, Eden’s family, consisting of two siblings and their families, leave Eden realizing there is no hope for recovery. And the young girl, Andy, whom Mary gave birth to after Eden was admitted to the burn unit, was sent to live with Mary’s mother.

When Eden becomes conscious, he is fixated on a cockroach that may or may not actually exist. With a longtime phobia of insects, Eden fears this bug and hordes of other cockroaches will overpower him and crawl into his wounds and mouth while he is in this vulnerable state. While this is taking place in his mind, the monitors show Eden in cardiac arrest. Mary, in her first visit to her mother’s house in three years, is called back to the hospital for Eden’s end.

The narrative begins to shift swiftly between present and past, becoming part mystery novel as readers piece together the characters’ histories that led to Eden being in the burn unit. Readers learn that Mary did not support Eden’s reenlistment, and also that the narrator could not imagine deploying to Iraq without his best friend. Mary knows Eden would stay if she conceives a child. The obstacle in this plan is Eden is currently impotent. As the time for Eden to make a choice draws near, Mary decides to have sex with the narrator, then coax Eden to have sex with her so she can claim the child as Eden’s. The first part of the plan works, but the latter does not, and within months, Eden realizes Mary has had an affair. Before deploying, Eden decides he will raise the child as if his own, and Mary and Eden discuss how their life together will be once he returns.

The couples’ future plans are ruined when Eden’s return becomes a waiting game for his death. Eden himself, after seeing the futility of his own situation, finally manages to communicate his desire by clacking his teeth in a code learned at survival training. An ex-military nurse, Gabe, solves the code, and tells Mary that it is Eden’s wish to end his life. When Mary hears the code for the end herself, she refuses Eden’s request. This sends Eden back into an unconscious state. And now, years later, Mary still waits, visiting Eden each day in the hospital while her mother is raising Andy. Even the narrator waits for Eden in an afterlife of white space.

More summaries and resources for teaching or studying Waiting For Eden.