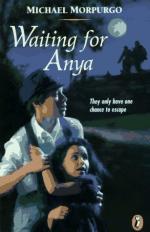 Michael Morpurgo
This Study Guide consists of approximately 23 pages of chapter summaries, quotes, character analysis, themes, and more - everything you need to sharpen your knowledge of Waiting for Anya.

This detailed literature summary also contains Topics for Discussion and a Free Quiz on Waiting for Anya by Michael Morpurgo.

Waiting for Anya is a novel by children's author Michael Morpurgo. This novel is about a small village in France that is invaded by German forces during World War II. The so-called Black Widow of the village, Madame Horcada, lives alone outside the village on her small farm. Everyone ignores her and is afraid of her. However, Jo discovers that Madame Horcada, with the help of her son-in-law, is offering protection to Jewish children who are attempting to escape over the border into Spain. This novel is not only a story of the heroes and enemies of history, but is also an inspiring story of how one village came together to do the right thing.

Jo falls asleep while watching the family sheep, allowing a starving mother bear to get too close to the sheep. Jo runs into town for help and the men who remain, those who could not fight in the war, rush into the mountains to kill the bear. When they return, the men are triumphant, but Jo worries over the safety of his dog, Rouf. Jo goes into the mountain to find his dog and is shocked to discover Rouf has found a bear cub abandoned by the hunted mother bear. Not only this, but there is a man, a stranger to Jo, who has come to rescue the bear.

The man asks Jo to forget he ever saw him, but Jo cannot resist finding out who he is. Jo and Rouf follow the man to Madame Horcada's farm. Madame Horcada is a lone figure in this village of companions, an oddity that many of the children fear. Jo is aware of this fear as he peeks inside the kitchen window of her house, attempting to learn who the man is. Just before Jo falls and gives away his presence, Jo learns the man is Benjamin, Madame Horcada's son-in-law.

Jo returns to Madame Horcada's farm more than a month later, curious to learn the fate of the abandoned bear cub. Jo sneaks into the barn when he hears a noise, but instead of finding a bear cub, he finds a little girl. Benjamin catches Jo there and takes him into the house, where Benjamin and Madame Horcada tell him that the girl in the barn, Leah, is a Jew who is the sole survivor of her family. Benjamin explains about the atrocity being acted out against Jews in Germany and how he and his daughter, Anya, thought they were safe in Paris. When the Germans invaded Paris, Benjamin and Anya attempted to escape and were separated on the road. Benjamin has come to Madame Horcada's to wait for his daughter. While he waits, Benjamin plans to help as many Jewish children as he can escape into Spain.

Jo agrees to keep Madame Horcada and Benjamin's secret. However, when he returns to the village, Jo learns that a regiment of German soldiers plan to move into the village so that they can easily patrol the nearby border with Spain. Jo waits until the following day to tell Madame Horcada, but when he arrives he learns that Benjamin attempted to take Leah across the border the night before and has failed to return. Jo finds Benjamin and Leah in the shed behind his father's shepherds' cottage in the mountains. Benjamin broke his ankle while attempting to run from a German patrol.

Jo's father returns unexpectedly from the war, angry and sullen. One day Jo's grandfather tells him about the children on Madame Horcada's farm. Together they devise a plan to sneak the children to Spain in front of the Germans. They decide to drive all the sheep in the village into the mountains and to hide the children in plain sight, pretending they are members of the various village families. The plan works, but unfortunately, Benjamin and Leah are caught after sneaking the children into Spain that night. Leah and Benjamin are sent to a concentration camp where it is presumed they were killed.

The war ends shortly thereafter. Grandfather marries Madame Horcada. Jo takes on more responsibility around the home, taking the sheep into the mountains alone the following spring. One day, his family comes up to have a picnic. Jo learns that Anya has finally found her way home.

More summaries and resources for teaching or studying Waiting for Anya.