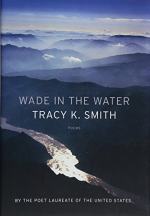 Smith, Tracy K.
This Study Guide consists of approximately 54 pages of chapter summaries, quotes, character analysis, themes, and more - everything you need to sharpen your knowledge of Wade in the Water.

In “The United States Welcomes You,” the speaker interrogates the arriving people, questioning everything from their dancing to their motives. In the final two lines, the speaker’s questions become reflexive: “Is this some enigmatic type of test?” (41).

In “New Road Station,” the speaker searches for an image to personify the rush of history, considering a woman crowding her children onto a bus, a carcass swarmed by flies, a protesting crowd, a silent audience watching a historical film, a speeding bus, a voice on the radio, or a sleeping child.

“Theatrical Improvisation” consists of stage directions and dialog. It describes a series of attacks, with actors portraying both victims and perpetrators. One attacker says: “We want these people / To feel unwanted” (43). That actor then becomes a victim as a crowd of actors beat him. The stage directions also include the audience...

More summaries and resources for teaching or studying Wade in the Water: Poems.

Wade in the Water: Poems from BookRags. (c)2022 BookRags, Inc. All rights reserved.