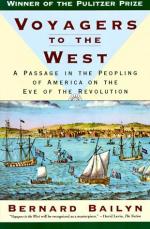 Bernard Bailyn
This Study Guide consists of approximately 53 pages of chapter summaries, quotes, character analysis, themes, and more - everything you need to sharpen your knowledge of Voyagers to the West.

Voyagers to the West Summary & Study Guide includes comprehensive information and analysis to help you understand the book. This study guide contains the following sections:

This detailed literature summary also contains Topics for Discussion and a Free Quiz on Voyagers to the West by Bernard Bailyn.

In Voyagers to the West, Bernard Bailyn examines the dramatic increase in immigration to the American colonies from Britain in the years leading up to the American Revolution. He focuses on who the immigrants were, where they came from, why they were immigrating, and where they went in the colonies. His main data source is an emigration register kept by British customs officials during this time. He supplements that information with data from newspapers, town records, personal manuscript collections, and so on.

Bailyn begins his work by giving a broad overview of the early 1770s, and the increase in emigration from the British Isles that was taking place. He argues that this immigration to the colonies helped form the basis of modern American society and increased tensions between the colonies and the crown. The British government became concerned about the number of emigrants leaving, and how their exodus might affect the country. Officials considered banning all emigration to the colonies but decided to first study the phenomenon by compiling official statistics about who was leaving and why.

The emigration Register that developed provides a wealth of information about the emigrants that left the British Isles in the early 1770s, before the American Revolution halted all emigration to the colonies. Bailyn discusses the data found in the Register, including information about the emigrants' social and economic statuses, their ages and sex, stated reasons for emigrating, and their final destinations. He finds that there were two movements from Britain during this time, reflecting different social and economic forces.

The first movement is a labor force made up of indentured servants from central and southern England who went mainly to the middle colonies of Pennsylvania, Maryland, and Virginia. He explains how these individuals were recruited, how they were distributed upon reaching the colonies, and so on.

In the last sections of the book, Bailyn uses particular situations and people to show the second migration, which consisted of mostly families from northern England and Scotland. The experiences of these individuals, listed in the Register, are fleshed out and expanded on from additional sources. The narratives illustrate how the emigrants came to leave the British Isles and their experiences in reaching and settling in the North American colonies.

More summaries and resources for teaching or studying Voyagers to the West.

Voyagers to the West from BookRags. (c)2022 BookRags, Inc. All rights reserved.