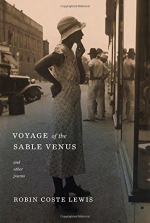 Robin Coste Lewis
This Study Guide consists of approximately 63 pages of chapter summaries, quotes, character analysis, themes, and more - everything you need to sharpen your knowledge of Voyage of the Sable Venus.

Voyage of the Sable Venus Summary & Study Guide includes comprehensive information and analysis to help you understand the book. This study guide contains the following sections:

This detailed literature summary also contains Quotes and a Free Quiz on Voyage of the Sable Venus by Robin Coste Lewis.

The following version of this book was used to create this study guide: Lewis, Robin Coste. Voyage of the Sable Venus and other poems. Knopf. 2017.

Voyage of the Sable Venus is broken into three parts, marked with Roman numerals I through III. Parts I and III feature autobiographical and personal poems, while Part II contains the title poem, "Voyage of the Sable Venus." Part I explores different settings, characters and forms, and is more experimental and cerebral than its counterpart, Part III. In the poem "verga:" the violence against women in Somalia at the start of the 21st century is inverted and explored as Lewis manipulates a quote from a women's refugee leader into a poem. "The Wilde Woman of Aiken" is a persona poem, told in the voice of a 19th century Black woman who was made to pose for a picture of things the photographer found hideous. Other poems like "From: To:," "The Mothers," "Beauty's Nest," and "Let Me Live in a House by the Side of the Road and Be a Friend to Man" explore different time periods and characters, as well. They all explore the African American experience, as well as the nuances of racism since the end of American slavery.

Part I plays not only with setting and characters, but also with language. "verga:," "Dog Talk," and "Red All Over" all feature experimental language that differs from the other straight forward free verse poems in the section. "verga:" restructures a quote from a refugee leader, using the quotation's language as a toolbox to create a series of perplexing and fantastical lines. "Dog Talk" constructs its own kind of language, and "Red All Over" follows auditory and rhythmic rules more than a narrative structure.

The other poems in the section, such as "Plantation," "Summer," "On the Road to Sri Bhuvaneshwari," and "Mother Church No. 3" follow the speaker who appears again in section three. This speaker is a Black mother and college professor grappling with her past, as well as her inherited history. She does not disclose the details of her life here, but instead shows the reader what she is doing in the present moment. Part I works to introduce this speaker, who returns in Part III, as well as the collection's central themes of Black womanhood, the legacy of racism in America, and confronting history.

Part II contains the titular poem, "Voyage of the Sable Venus." The poem is the narrative of a voyage through the history of Black women in Western art from 38,000 B.C. to postmodernism. Lewis constructed the poem using titles, descriptions, or the collection names of Western artworks featuring a Black woman, and she then altered the grammar and punctuation of these titles. She also included pieces by Black women artists and Black queer artists, most of which were from the latter half of the 20th century. "Voyage of the Sable Venus" begins with a prologue, in which Lewis describes her process in detail, as well as some of her goals for writing the piece. It proceeds to The Ship's Inventory section, and the Invocation, which are both poetic prologues to the main voyage. They serve to introduce the reader to the piece and its style, and to center the piece in both history and spirituality. The poem is then broken into eight different catalogs which span from Ancient Greece, Rome, and Egypt, to the start of Christianity, and then America from its founding until the present. Each catalog features only works of art from its time period, and so each creates a tapestry of how Black women were depicted by people from that particular culture. This then illustrates how Black women were seen and treated by each society, as well.

Part III is the most personal, and it presents an intimate view of the past that the main speaker had been trying to avoid. It uses simpler, clearer language to paint a picture of the speaker's life from childhood onwards. "Frame" and "Lure" deal with childhood and trauma, both the trauma of childhood sexual abuse and of growing up Black in America. "Second Line" follows the death of the speaker's father, while "Félicité" allows the speaker to come to terms with the fact that her Black ancestors had owned slaves. The poems in this section imply that the speaker has begun to confront her past, which creates a sense of linear movement from Part I through to Part III. The speaker in Part I was reluctant to look back to her past, but knew she had to examine her history, as well as the history of her ancestors. Part II in a sense is this work, the work of finding one's identity by looking back through history. In Part III, the speaker is examining her own past now that the journey through history is over. She is now able to face those traumas and memories that she had been avoiding, and is granted clarity as a result.

The final part of the collection is an epilogue, titled "Boarding the Voyage." This section recounts Robin Coste Lewis's experience writing "Voyage of the Sable Venus," which she describes as a life-saving labor. She pored through museums and art institutions in search of titles, all the while accompanied by the Sable Venus, who she saw as a guiding figure. This work allowed her to bring the forgotten Black women of Western art to life again.

More summaries and resources for teaching or studying Voyage of the Sable Venus.

Voyage of the Sable Venus from BookRags. (c)2022 BookRags, Inc. All rights reserved.