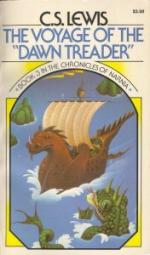 Overview
About the Author
Plot Summary
+Chapters Summary and Analysis
Chapter 1, The Picture in the Bedroom
Chapter 2, On Board the Dawn Treader
Chapter 3, The Lone Islands
Chapter 4, What Caspian Did There
Chapter 5, The Storm and What Came of It
Chapter 6, The Adventures of Eustace
Chapter 7, How the Adventure Ended
Chapter 8, Two Narrow Escapes
Chapter 9, The Island of the Voices
Chapter 10, The Magician's Book
Chapter 11, The Dufflepuds Made Happy
Chapter 12, The Dark Island
Chapter 13, The Three Sleepers
Chapter 14, The Beginning of the End of the World
Chapter 15, The Wonders of the Last Sea
Chapter 16, The Very End of the World
Free Quiz
Characters
Objects/Places
Setting
Social Sensitivity
Literary Qualities
Themes
Themes/Characters
Style
Quotes
Adaptations
Topics for Discussion
Essay Topics
Ideas for Reports and Papers
Further Study
Copyright Information
Order our The Voyage of the "Dawn Treader" Study Guide

Additional Resources for The Voyage of the "Dawn Treader" by C. S. Lewis

C. S. Lewis
This Study Guide consists of approximately 69 pages of chapter summaries, quotes, character analysis, themes, and more - everything you need to sharpen your knowledge of The Voyage of the "Dawn Treader".

Coren, Michael. The Man Who Created Narnia: The Story of C. S. Lewis. Grand Rapids, MI: William B. Eerdmans, 1994. Intended for young readers, this is a well-illustrated and well-rounded account of Lewis's life.

Edited by Lyle W. Dorsett and Marjorie Lamp Mead. New York: Simon & Schuster, Touchstone, 1985. Lewis had an extensive correspondence with children, who wrote to him from all over the world. He made a point of replying to every letter he received, although near the end of his life he needed his older brother Warnie's help. This book is a selection from his many letters written to young readers.

He is charming, and he gives serious answers to...

More summaries and resources for teaching or studying The Voyage of the "Dawn Treader".

The Voyage of the "Dawn Treader" from BookRags. (c)2023 BookRags, Inc. All rights reserved.