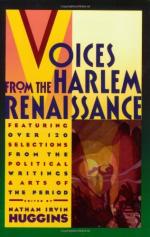 Nathan Huggins
This Study Guide consists of approximately 36 pages of chapter summaries, quotes, character analysis, themes, and more - everything you need to sharpen your knowledge of Voices from the Harlem Renaissance.

Voices from the Harlem Renaissance Summary & Study Guide includes comprehensive information and analysis to help you understand the book. This study guide contains the following sections:

This detailed literature summary also contains Topics for Discussion and a Free Quiz on Voices from the Harlem Renaissance by Nathan Huggins.

The book contains more than one hundred pieces of art, poetry, fiction and essays from an array of artists deemed important to the Negro renaissance, an era around the 1920s and centered in Harlem. The first section of the book is titled "New Negro Radicalism" and outlines several ideas and ideals, including that there must be a "new crowd" to take the roles of leaders among the race if the group as a whole is to advance. Another concept is that the sheer number of Negroes means the race can effect great change, but that there must be a coming together in order to make that happen. This unity is seen in different ways by different writers, with some insisting that Negroes must see things the same and pull from their African roots while other says that it's no more necessary that they be "African" than for a person with ancestors from Germany to act "German."

Harlem Renaissance: The Urban Setting describes Harlem at the time of this renaissance, though the descriptions are also presented in other sections of the book. The Cotton Club is considered a hot place by some writers but others say the fact that only the elite are allowed in means it's not the place where the masses gather. There are additional sections that include stories, poems, and essays focused on the identity of the African American and on the history and folk traditions of the race. A "Visual Arts" section includes art from several artists of the period.

The question as to whether the artistic endeavors of the era are "art or propaganda" is explored to some degree. There are some writers who believe the Negro artists hold true to themselves and write honestly about life as they see it, but others argue that too many of the artists tone their work to fit the ideals of white critics, avoiding issues that might offend the white reader or viewer and ignoring the opinions of Negroes. It's also pointed out that Negroes tend to pay more attention to their best and brightest only after the artist wins acclaim from the whites.

Through an array of opinions and literary efforts, the reader gains insight into the minds, ideas, desires, and stumbling blocks of the artists of the era that is known as the Harlem Renaissance.

More summaries and resources for teaching or studying Voices from the Harlem Renaissance.

Voices from the Harlem Renaissance from BookRags. (c)2022 BookRags, Inc. All rights reserved.