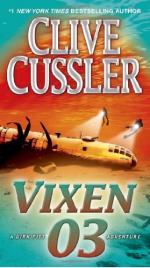 Clive Cussler
This Study Guide consists of approximately 36 pages of chapter summaries, quotes, character analysis, themes, and more - everything you need to sharpen your knowledge of Vixen 03.

This detailed literature summary also contains Topics for Discussion and a Free Quiz on Vixen 03 by Clive Cussler.

Vixen 03 by Clive Cussler is the third novel in the collection of Dirk Pitt novels. Vixen 03 is a military transport plane that disappeared more than thirty years ago. Pitt stumbles across the mystery of Vixen 03 while weekending with his lover, Congresswoman Loren Smith. After Pitt finds Vixen 03 in a man-made lake, he learns that Vixen 03 carried a top secret cargo that has the power to wipe out entire cities and leave the cities uninhabitable for hundreds of years. As Pitt scrambles to locate the entire cargo, he finds himself in a fight to save Washington, D.C. from South African radicals. Vixen 03 is Dirk Pitt at his most exciting, taking the reader on a ride they hope will never end.

Dirk Pitt is spending a weekend with Congresswoman Loren Smith at her family cabin in Colorado. Pitt goes into the garage of the cabin to find some fishing gear while Loren answers correspondence. Pitt finds the air tank and nose gear to an airplane that set him off on a hunt for the plane to which they belong. Pitt is able to establish through an investigator at the FAA that the nose gear belongs to a Stratocruiser, a large plane built by Boeing and used both in the military and as a passenger plane. This particular Stratocruiser is traced to a military plane. Pitt begins scouring the countryside, hoping to find the rest of the plane. When he does, Pitt not only finds the wreckage, but the body of a murder victim and another mystery.

Pitt wants to salvage the plane, which he now knows was called Vixen 03 on her final flight but cannot get government approval. Pitt is disappointed but is now focused on other things. However, when Pitt learns the identity of the officer who authorized the flight, he decides to pay him a visit. This officer informs Pitt that Vixen 03 was transporting a weapon that could potentially wipe out an entire city and leave it uninhabitable for hundreds of years. Pitt is urged to salvage the plane and destroy its cargo immediately.

At the same time there is a power struggle going on in South Africa between the white government and the black army of the AAR. The defense minister is desperately searching for a military strategy to give him a leg up on the AAR. The defense minister has stumbled across a strategy called Operation Wild Rose, which he shows to a retired Naval commander to learn if it could work. The commander tells him that it is near impossible. However, the Naval commander, Patrick Fawkes, changes his mind when he learns that the AAR has murdered Fawkes' entire family.

Pitt and his crew salvage Vixen 03 only to find the body Pitt saw in the cargo area has disappeared and eight of the bombs are gone. Pitt reviews the evidence and realizes that the kind neighbors to whom he went for information and to use the phone are the only people who knew about the plane salvage in time to move the body. Pitt confronts this elderly couple and learns that they were involved in the salvage of Vixen 03 with Loren Smith's father long before Pitt became aware of its existence. The neighbors began selling the bombs for several thousand dollars and decided they did not want to share the wealth with Loren's father. The couple killed Loren's father and hid his body in Vixen 03 until they learned Pitt had found the wreck.

Pitt begins tracking down the sold bombs. Four are still in storage at the weapons dealer the neighbors sold it to, but four were sold by mistake. Pitt tracks down two of these and recovers them, but learns the other two were sold to the AAR. At that moment, Patrick Fawkes is preparing to bombard Washington, D.C. with sixteen-inch guns, including the two bombs taken from Vixen 03. Pitt manages to sneak aboard Fawkes's ship and disarms one bomb. At the same time, Pitt convinces Fawkes that the other bomb must be located and disarmed. However, before they can find the last bomb, Fawkes and Pitt are attacked by a South African spy. Pitt is injured and thrown from the ship, and the bomb is accidentally released over Washington, D.C. Pitt's friends manage to snag the bomb onto their helicopter with its parachute and fly it over the ocean where Pitt releases it into the water below.

More summaries and resources for teaching or studying Vixen 03.