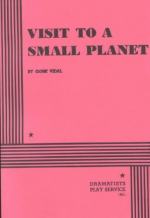 Vidal's subtitle for the play is A Comedy Akin to a Vaudeville. Locate sources that describe what vaudeville theater was like and explain how the play resembles this faded American theatrical form.

Research the McCarthy trials and the impact they had on American life. Compare and contrast your findings with the way that Vidal presents the fear of Communism in his play.

The nuclear war that Kreton almost causes can be compared to the Cuban Missile Crisis of 1962, a nuclear standoff between the U.S. and the Soviet Union. Research this topic and compare the role that then President John F. Kennedy played in averting this disaster.