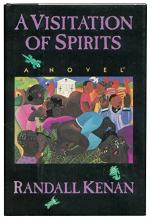 Related Topics
Randall Kenan
If I Had Two Wings

Randall Kenan
This Study Guide consists of approximately 60 pages of chapter summaries, quotes, character analysis, themes, and more - everything you need to sharpen your knowledge of Visitation of Spirits.

This detailed literature summary also contains Quotes and a Free Quiz on Visitation of Spirits by Randall Kenan.

The following version of this book was used to create the guide: Kenan, Randall. A Visitation of Spirits. First Vintage Contemporaries Edition, Random House of Canada, 2000.

In the novel's first section titled 'White Necromancy,' James Greene and his relatives Ruth and Ezekiel drive to an unknown location on December 8, 1985. An unnamed narrator describes North Carolina's historical tradition of hog killing. On April 29, 1984, Horace plans a midnight ritual in order to summon a demon. Horace's objective is to turn himself into a bird in order to escape his troubled life. The demon occupies Horace's mind, causing him to hallucinate evil spirits around him. The demon commands Horace to steal his grandfather's gun.

In 'Black Necromancy,' James recalls the disconcerting events at Tims Creek Elementary School on April 30, 1984. His cousin, Horace Cross, claims to have been taken over by a demon. In December of 1984, James drives with his relatives to Veteran's Hospital in Fayetteville to visit a dying relative. He recalls his theological training to become a reverend, and later a principal at Tims Creek Elementary. Horace's grandfather Ezekiel reflects on family members and their history since before Emancipation. On April 30, 1984, the demon urges Horace to walk toward First Baptist Church of Tims Creek. At the church, Horace has a rush of memories, hallucinating the entire congregation, his childhood self, and relatives of the past. Reverend Barden angrily condemns homosexuality and Horace reflects on his sexual attraction toward men. Horace runs from the church crying, taking Ezekiel's gun with him. Horace walks to his high school and the demon instructs him to steal a teacher's car parked in a garage nearby.

In 'Holy Science,' James remembers the conversation he had with Horace at First Baptist Church in June of 1983, in which his cousin confessed to being homosexual. James admits to having experimented with men as a young man and assures Horace his actions are just a phase. James suggests that Horace pray and ask God for strength. On April 30, 1984, Horace sits in the stolen car in the school parking lot, unable to remember how he had acquired the vehicle. He enters his old biology class, where he experiences memories of his first homosexual relationship with a classmate named Gideon. They were romantically involved during the summer of their freshman year, after which Horace had ceased interaction with Gideon, determined to suppress his sinful homosexuality. Horace narrowly escapes a group of aggressive white students in the parking lot and drives away from the school.

'Old Demonology' opens with James' memories of his late wife Anne. In a past scene, Anne asks if he is sexually attracted to her or capable of wanting sex. James had returned from work early one day to find Anne in their bedroom with another man. James had sat on the front porch for hours, and after Anne begged his forgiveness over her infidelity, he had thrown up. He recalls Thanksgiving Day of 1983, during which Horace arrived to the family dinner late with a newly pierced ear. Horace had experienced intense criticism, after which Ezekiel banned him from associating with his white friends. In the present, James believes this altercation had been the cause of what had happened to Horace, which has not yet been revealed to the reader. In December of 1985, Ruth and Ezekiel have a heated argument at the Veteran's Hospital, which continues at a restaurant and garners the attention of other diners. On April 30, 1984, Horace drives from his high school to the Crosstown theater. Horace remembers the summer he worked there after his sophomore year, walking the grounds of the outdoor theater and experiencing multiple hallucinations. Horace sees a double of himself in the costume building, who accompanies him to a cemetery nearby. In the cemetery, Horace hears the prophecies of African Americans regarding slavery, and the death, racism, and poverty of his race leading into the modern day. Horace shoots his double self, an action that symbolizes his complete descent into insanity and the loss of his true identity.

In 'Old Gods, New Demons,' Horace recalls his childhood, having been raised by Ezekiel and Aretha Cross. Horace remembers liking academics, fantasy television shows and comic book characters. On April 30, 1984, Horace confronts James with Ezekiel's gun at Tims Creek Elementary School. The demon explains that Horace is no longer mentally present and has reached a point that surpasses insanity. James refuses to accept Horace's belief in demons, thinking his cousin is playing a joke on him. The demon explains that Horace is unable to live in this world, and Horace shoots himself in the head. The novel concludes with an unnamed narrator outlining the historical activity of tobacco harvesting and its importance to African American heritage.

More summaries and resources for teaching or studying Visitation of Spirits.