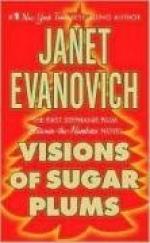 This detailed literature summary also contains Topics for Discussion and a Free Quiz on Visions of Sugar Plums by Janet Evanovich.

It's a couple of days before Christmas, and Stephanie Plum is in a panic. There is no Christmas tree in her apartment. Neither presents nor cards have been bought or distributed. As always, Stephanie is on the verge of screwing up big, just like she does every year.

Enter Diesel. Diesel is a gorgeous, sexy man with supernatural abilities. Diesel never fully explains these powers or how he happened to be in Stephanie's kitchen one morning. All Diesel will say is that he has come to help Stephanie. Desperate for money, and therefore to capture the only fugitive on the list, Stephanie agrees to let Diesel help. Rather, Stephanie can't get rid of Diesel and decides to accept it.

Stephanie's target is a bail jumper named Sandy Claws. Sandy is wanted for theft. Allegedly, the Santa wannabe broke into a hardware story to steal paint and other items he needed to finish up the toy making before the big day. Stephanie and Diesel make the rounds trying to catch the extremely aloof man. Elaine, Sandy's widowed sister is the only one at the house and all of her attention is focused on baking cookies for the elves.

Stephanie cannot figure out why Diesel has come to help. Along the way, Stephanie learns that part of Diesel's job is to apprehend those who are using their supernatural abilities for evil. Since every one knows that Sandy is a good guy, there must be someone else. That someone else is Ring, a man with the ability to make electricity. Ring is also Sandy's archenemy. It is Diesel's job to capture Ring and take him back to the home for aging "unmentionables". Since Stephanie can't get close to Sandy's workshop, the bounty hunter convinces a little person to apply for a job as one of Sandy's elves. Once the little person, Randy Briggs, gets the job, he refuses to help Stephanie capture Sandy. Briggs needs the job. There are several catastrophes involving elves, in which Stephanie is attacked and Stephanie's and Lula's Christmas trees are demolished. Stephanie and Lula both hate elves.

Ring escalates the campaign for revenge and begins to send firebombs and electric shocks to various places. However, since Ring is old, his aim is no longer true. A neighbor of Sandy's loses her garage thanks to a firebomb. Stephanie's new Christmas tree and car are blown up.

Stephanie and Diesel finally track down Sandy. Stephanie can't arrest him because it's Christmas Eve and he is Sandy Claws. As the group discusses Ring, the ceiling of the factory caves in. Thanks to Diesel, everyone is rescued.

With only four hours to go, Stephanie completes her Christmas shopping and Stephanie and Diesel go to the Plum house for Christmas dinner. The dinner is chaotic as usual. Morelli is still unsure about Diesel's presence. Grandma Mazur can't find her teeth. Mary Alice doesn't believe in Santa Claus any more.

After dinner, Grandma Mazur brings her new studmuffin to meet the family. It is none other than John Ring, the one who has been wreaking havoc on Trenton. Ring is nervous and is unable to control the electricity shooting out from his body. The Plum Christmas tree goes up in flames and Ring escapes. Diesel follows and apprehends Ring.

Mary Alice proclaims that she is going to wait for Santa. The rest of the family joins in. At midnight, Sandy Claws arrives with elves in tow, bringing presents for everyone. Sandy explains that Diesel had relayed the events of the evening and now it was Sandy's turn to try and make things right. There is a grand party.

The next morning, Diesel tells Stephanie that it's time for him to go now that Ring has been captured. Diesel also says that it was a very good Christmas and that he will be back someday.