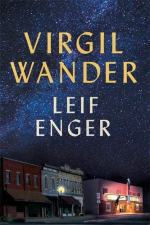 Virgil Wander is a literary novel that follows the life of the titular character Virgil Wander after he survives an accident. The townspeople are surprised by his survival and Virgil tries to understand why his life was spared. Virgil deals with memory loss of the accident and longs for words to return to his memory.

Virgil meets Rune, a mysterious man from Norway who makes kites. Rune is the father of Alec Sandstrom, a young athlete who disappeared in a plane over Lake Superior. Alec’s body was never recovered, leading to rumors that Alec survived. Rune only learns about Alec after Alec’s mother dies. Rune wants to learn about his son and must reconcile with learning about having a son at the same time learning that the son is deceased.

Virgil needs someone to stay with him as he recovers from his head injury and offers Rune a place to stay. Rune meets Nadine, Alec’s widow, and Bjorn, Alec’s son. Virgil and Nadine have history and begin to explore a relationship together.

Adam Leer, a mysterious filmmaker, returns to Greenstone. The locals are fearful of Adam, believing that Adam let his brother die in a snowstorm when they were young boys. Adam’s dark reputation continues after Adam is seen talking to Shad Pea and Shad drowns while fishing soon afterwards. Shad’s son Galen believes that his father was taken into the water by a large sturgeon and Galen becomes obsessed with catching the sturgeon.

As Virgil and Nadine grow closer, Virgil gives Bjorn a job at the movie theater that he runs. Bjorn likes doing the work. Adam tries to buy the theater from Virgil, but Virgil does not want to sell. Virgil has a collection of pirated films that he acquired when he purchased the theater. Virgil decides that he should return the movies to the studios who they rightfully belong to, and Virgil is hopeful that he will not be fine or imprisoned for having them.

Bjorn continues to work for Virgil. When Bjorn is offered a job by Adam Leer, Nadine confronts Adam, insisting that Adam leave Bjorn alone. One night, Rune flies his kite and in electrocuted, but survives.

Adam hires Jerry, a local man who is down on his luck, and Jerry seems to be turning his life around. People talk about how different Jerry is, but view the changes in Jerry as positive. The townspeople are unaware that Jerry and his wife Ann have divorced and Ann is having an affair with Adam. Jerry’s apparent success is a smokescreen for something darker.

The town of Greenstone prepares for an annual festival. As the festival draws near, there is suspicion about Jerry. It is revealed that Jerry is plotting to set off a bomb during the festival. The bomb explodes and Jerry is taken into custody. Adam disappears.

Virgil and Nadine travel to Norway to see where Rune is from. Virgil feels he has stayed in one place for too long and decides that he needs to see other parts of the world.