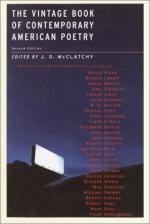 J. D. Mcclatchy
This Study Guide consists of approximately 74 pages of chapter summaries, quotes, character analysis, themes, and more - everything you need to sharpen your knowledge of The Vintage Book of Contemporary American Poetry.

This detailed literature summary also contains Topics for Discussion and a Free Quiz on The Vintage Book of Contemporary American Poetry by J. D. Mcclatchy.

The main characters in this anthology of poetry are the poets themselves. They are often the speakers in their poems or the subjects of their poems. Most of the poems are a study, meditation, or examination of the world, the human mind, or death through the eyes of the poet, with many of the poets being focused on their own lives and how they fit into the world. Robert Lowell's work reveals the time in which he lived. He was an instinctively rebellious man whose troubled life became the subject of many of his poems. Theodore's early works are reminiscent of his childhood and his father's greenhouses. W. D. Snodgrass' poems describe the turmoil of his life and reminds the reader of Greek myths or Freudian case studies. Anne Sexton was a housewife and mother who began writing poetry when it was suggested by her therapist to help her understand and recover from the series of mental breakdowns she had suffered. Sylvia Plath's early work was autobiographical. Audre Lorde wrote about her personal life. Mary Oliver is a meditative poet who sees herself in everything she studies. Charles Simic was born in Yugoslavia and is haunted by memories of war-torn Europe. His deceptively simple poems pay close attention to objects, his dream images, and mental traps. Marilyn Hacker's poems are autobiographical and chronicles of her life. She is candid about her lesbian affairs and feminist beliefs. Sharon Olds' work shocks many with its revelations about her family and herself. Louise Gluck's powerful and painful works are autobiographical. Yusef Komunyakaa was influenced by many people and aspects of life, and his subject matter ranges from his childhood in Louisiana to his military service in Vietnam. Li-Young Lee's poems serve as memories of his family and as meditations focusing on the idea of boundaries.

Family and Loved Ones of the Poetsappears in Various poems

Other characters that are frequently discussed, analyzed, and eulogized are the poet's family and other loved ones. Often these family members and loved ones affect the poet's lives and beliefs; therefore the poets use poetry as a way to analyze the impact these people have had on them. Sometimes the poets use poetry as a way to vent about the ill-treatment of loved ones, but more often pay homage to loved ones through their poetry. Theodore Roethke's "I Knew a Woman" is a poem that describes a woman with whom the poet was in love. J.V. Cunningham's "To My Wife" is a poem about the love that is felt between people and how it shifts and alters like the seasons and can be as subtle or powerful as regret and anger. Mona Van Duyn's "The Twins" describes the poet's blind brother who knows a great deal and is very talented despite his handicap. The poet describes their tumultuous love/hate relationship, which resembles many sibling relationships. The poem ends with a description of times when these twins are at their closest. Howard Moss' "Elegy for My Sister" describes the dying of his sister from cancer and her strength throughout the entire ordeal. James Dickey's "The Hospital Window" tells of his visits to his father in the hospital. Carolyn Kizer's "Amusing Our Daughters" is a poem to the poet's brother regarding their roles as parents. W.D. Snodgrass' "from Heart's Needle" is a poem to the poet's deceased child. "Mementos 1" describes the finding of an old photo of the poet's ex-wife. "A Locked House" describes the end of his marriage. C.K. Williams' "Alzheimer's: The Wife" describes the pain one and one's family suffer due to Alzheimer's. Michael S. Harper's "Grandfather" describes the poet's grandfather's life as a black man in the twentieth century. It reveals his struggles, as well as his grandson's views of him and the world at that time. "Nightmare Begins Responsibility" describes the dying of the poet's father in a hospital that the poet does not trust. As his father dies, his responsibility begins. William Matthews' "Dire Cure" describes the poet's struggles during his wife's difficult bout with cancer. Sharon Olds' "You Kindly" intimately describes the sexual acts of the speaker as she speaks to her lover. Edward Hirsch's "My Father's Back" describes the painful day the poet's dad walked out on him and his family. Gjertrud Schnackenberg's "Supernatural Love" describes the poet's love for her father. In Henri Cole's "Chiffon Morning" he describes his parents' failing marriage. Li-Young Lee's "This Hour and What Is Dead" describes the poet's feelings for his father, brother, and God, as well as his anxiety about the running away that is soon to take place. "Pillow" describes all the thoughts the poet has at night that keep him from sleeping. He seems to suffer from a great deal of anxiety and stress about his future and the future of his family. "One Heart" is a meditation on freedom and one's ability to have this freedom. "Dwelling" reveals the poet's desire to find himself in his lover; he seems lost and is trying to use her to find his way.

Humanity is also another popular subject-matter and character described by the poets. Each poet who studies mankind uses his or her own unique way to analyze the actions and beliefs of the human species. Frequently the human mind is placed under the microscope in these poems to try to better understand why humans think and act the way they do.

Jay Wright uses his imagination to bring the life of Benjamin Banneker, a self-taught eighteenth century scientist, surveyor, and almanac maker, to life.

One of Berryman's poetic characters is Henry, who is a characterized version of himself, speaks of his guilt, as well as his fantasies. "The Dream Songs" follow Henry and events in his life.

Famous people are used by several of the poems as inspiration for the poets or people to whom the poets pay homage. Billie Holiday, Frederick Douglass, and Thomas Jefferson are several famous people from history who are mentioned in poems in this book.

Death is often personified by the poets when attempting to deal with death and dying.

Nature is often personified by the poets by giving various aspects of nature feelings and other human qualities to try to better understand nature.

Several poets use their own or other ethnic or racial groups as the subject-matter for their poets. This is done to analyze, honor, and explain these cultures.

Several poets use mythology and mythological characters as metaphors and imagery to aid them in getting the purpose of the poem across to the reader.